In 1915, when national-political awakening has started among Jewish youth, it also affected religious youth in Siedlce, including the Hasidic youth. 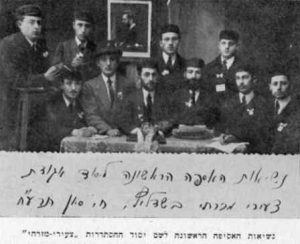 The main initiator of the Hasidic youth movement was Shalom Ialan, Ben-Torah and God-fearing, the son of Moshe Mocher-Sefarim, in whose poor house were no appropriate learning conditions. Ialan, together with Ahron Nelkenboim, Leib Rotbein and Pesach Rosen, worked out a plan for a cultural-religious organization called “Tvuna” (intelligence). The organization was to expand knowledge and fear of the Lord. In 1917 it closed its doors.

At that time there was already a small circle of “Tzeirei Ha’Mizrachi” in Siedlce, among them Rabbi Kalman Fraenkel and Joel Kamiinitz. In 1918, after the riots in Ukraine, when national ideas began to penetrate the ranks of “Tvuna”, meetings were held for four consecutive Saturdays dedicated to the matters of “nationalism and religion”. More than 30 members have expressed their opinion, and decided by majority vote to join – after two years of operation – to the movement of “Ha’Mizrachi”.

The national-political nature of the movement has enabled a large field of action, and the first task of the newly-elected Committee was to distribute and explain the beliefs of “Ha’Mizrachi” among and to the middle class, especially the Hasidic circles. With the stabilization of our branch members of the local committee of “Tzeirei Ha’Mizrachi” went to Makov, Sokolov and Mezrich, to establish branches of the movement there, as well.

Among the most prominent actions members of “Tzeirei Ha’Mizrachi” have established a cheap kitchen, aimed to help the Jewish population in need. The kitchen was set up at the home of S”M Mailish on 22 Ogrodova Street. The Polish representative, Mrs. Dr. Ritl  has expressed her satisfaction, more than once, at the order and precise account management of its balance sheet.

At the beginning of 1919 a district council meeting of the movement was held in Siedlce. Our town was declared the center of the county. Among the important decisions adopted in “Tzeirei Ha’Mizrachi” Council it was agreed to founded the “Bnot Mizrachi” movement. This Siedlce branch numbered 60 girls, including the vigorous activists Frida Nusbaum, Dina Hershel, Sara Radzinski, Sara Slooiatitzkh and Malca Serebnik . 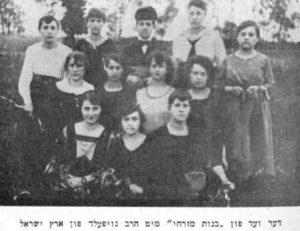 At the same time a kindergarten was established called “Orphans shelter” named after Rabbi Reines. The kindergarten was established in the backyard of Ms. Barg at 24 Ugrodova. The joint committee of “Tzeirei Ha’Mizrachi” and “Bnot Mizrachi” cared for proper operation. The activists has installed small tables and chairs  nicely decorated and painted, and gathered enough toys for 40 children who were educated there. The teacher Feigah Loortobski (later – Mardix), gave them  good education according to the Fröbel method.

“Ha’Mizrachi” showed activity only during elections. Even then it was “Tzeirei Ha’Mizrachi” who carried out the important work and promised to “Ha’Mizrachi” will reach the end the election process in a dignified manner.

Written by Avraham Friedman in the book: “Ancestors Tell Siedlce”.