Towards the end of the First World War, when Polish Legions organized struggle for Polish independence led by Pilsudski, Jewish volunteers from Siedlce joined one of these legions, which was founded in November 1917 in Ostrow and Komarov. The Jewish group leader, Zalman Frailich, was captured by the Germans together with Polish fighters, another young Jew, Moshe Rozenblat, was among Pilsudski’s fighters who entered Lomza and took over it immediately upon release from the Germans. In October 1918, shortly before the declaration of Poland’s independence, the Jewish representatives of the Siedlce city council issued a declaration of support and loyalty to the independent Polish state.

Soon the hopes of the Jews were lost, after expecting a new era in their relations with the Poles. As soon as the first year of independence, waves of anti-Semitism swept through Poland. On November 11th 1918 the Polish police dispersed a meeting of the “Bund” and “Poalei Zion”, held in Siedlce, and arrested one of the members of the “Bund”. Immediately afterwards, gangs of anti-Semites gathered in the city streets and Jewish passersby were attacked and beaten. During the riot police intervened and arrested a Jew and a Pole.

In 1919, during the Sejm election campaign, there was anti-Semitic propaganda in the city. Jewish candidates advertising signs were torn, and members of Jewish parties in Siedlce sent a telegram to the Polish Ministry of Interior and complained about the harassment of their election campaign. In April 1919 Itzhak Grinboim, Apolinary Hartglas and Noah Frilotzki visited Siedlce. Their performances in meetings held their by supporters have further intensified the anti-Semitic atmosphere.

Anti-Semitism in the city especially intensified during the Bolshevik-Polish war in 1920. In the spring of that year the Polish military commander, Krfobski, published a series of regulations against Jews in the city. All political and cultural organizations were ordered to cease their activities. Among others, operations of the culture company “Yiddishe Kunst” and fundraising on behalf of the Jewish National Fund halted it’s operations. At the same time arrests were made among Labor Party members and the leader of the “Bund” in the city – Yosef Sloshni, was sent to the Doumbia concentration camp near Krakow. A few days before the Polish army withdrew from the city, an order was issued that all Jewish men between the ages of 17 and 40 must leave the city together with the army.

The city had an atmosphere like the eve of the pogrom of 1906. Jews began to stock up on food, and many Jewish men hid in their homes and did not obey the evacuation order, fearing to leave their wives and family alone in such difficult years. This behavior angered the Polish population, and a local mine-worker, while threatening attacks against Jews, accused them of a lack of patriotism on the eve of the Soviets’ invasion to the city.

On August 6th, 1920, Siedlce was occupied by the Soviets. The following morning, leaflets were distributed in the city in Polish, Russian and Yiddish, announcing the establishment of a revolutionary council of three members. The Council was headed by a Jew – Alperovich and two Poles served with him. On August 14th and 16th, the council published leaflets ordering merchants to sell their wares at regulated prices. The workers were asked to support the new government. Indeed, the “Bund”, “Poalei Zion” and the P.P.S. members have posted messages of support to the Revolutionary Council. 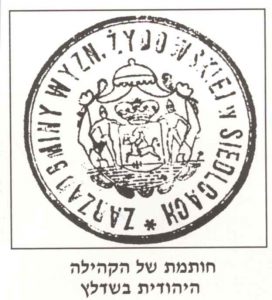 On August 18th 1920 the Soviet army withdrew from Siedlce and the city was conquered by the Polish army. That same day Polish public figures, including the Bishop of Fodlash – Henrik Fsdtzki and the mayor – Edmund Kostltz, issued a leaflet set out to defend the Jews. Most of the city’s Jews remained loyal to the Polish state. The masses aren’t allowed to take justice to their own hands. But nothing worked. As soon as they entered the city, military men began arresting Jews suspected of collaborating with the Communists. Appolinari Hartglas, who was visiting Siedlce, estimated the number of Jewish prisoners to be about 1,000. Four Jews were murdered in the grove outside the city, and many others were tried. About 20 Jews were tried and executed, including a key activist of the Zionist movement in the city, Abraham Grinshpan. Others were sentenced to 10 years in prison. During the trial, Polish residents rioted and looted Jewish houses and stores.

A special aid committee set up by the Joint estimated the damage to Jewish property at 11 million marks. Many of the city’s Jews were totally impoverished and needed the support of the committee.

The anti-Semitic and violent atmosphere also dominated the city in 1921. In October, the residents of Siedlce attacked a Jewish funeral procession and attacked its participants. In November a political trial opened against two Jewish representatives in the City Council – Ephraim Zelnik and Joseph Todin, accused of collaborating with the Soviets during the occupation and damaging the interests of the Polish state. They were sentenced to a year and a half in prison.