The last time we prayed at the Great Synagogue was at the end of June 1939. It was apparently Shavuot. I never again set foot in this synagogue (I was 12 at the time). 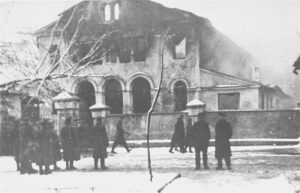 When the Germans came to our town in September 1939, they first burned the contents of the Genizah. Prayers? I do not remember if there were any prayers there.

Being in Rabog, in northern Russia, we managed to get a postcard feom my grandmother, Perl. It was at the end of 1940. From the postcard, we learned, as written in the same historical postcard, that “the Great Synagogue went out in dance.” From this we understood that the synagogue was burned down by the Nazi oppressor and his cronies. This they did for their great feast, the birthday of the Son of God.

At the time of writing this, the monument still stands on the ruins of the synagogue in memory of the soldiers of the Soviet armies, who fell fighting to release the city of Siedlce from the Nazis and were buried here in a mass grave. Why did they erect the monument here, on the ruins of the synagogue? This, too, can have only one answer – to eliminate any trace of the existence of a Jewish settlement in this city.

Near the monument, the remains of the community at the end of World War II erected a tiny monument in memory of members of the community who were exterminated by the Nazis. One day I read in the paper that this monument was desecrated by anti-Semites, and though the city Siedlce remained “Judn Rein”, which is cleansed of Jews, hatred of Jews still pervades it.

In July 1990 I visited with my dear wife, Etti, my hometown of Siedlce. This was a shocking experience. Describing it in few words is very difficult. The monument erected in memory of the Soviet soldiers is gone. The whole place occupied by a big building, taking up the entire complex which use to contain the Big Synagogue, the Beit Midrash, the community building, the old Jewish cemetery and all of the square, which was once “Stary Rink”. On the other side of the street, where once stood the carriages remained a narrow alley, the so-called ‘Ghetto Heroes Street”.

The tiny tombstone and name of the street can testify that here used to be a glorious Jewish community for centuries.

Sitting on the train on my way to Warsaw, I spotted a graffiti on a wall, which was written in Polish “Jew mortal enemy”. Of all this you – my son and grandson can understand what anti-Semitism is, even when people do not know what a Jew is and how a Jew looks. Then you’ll appreciate being a proud Jew in your country of Israel.