There are no other days like the High Holy Days in Israel, to seek forgiveness from the Almighty. On the eve of Yom Kippur, before going to the synagogue for the Kol Nidrei prayer, they used to go to each other to ask for forgiveness and especially to make up after old quarrels.

The main place, where my parents used to go and congratulate “Gmar Hatima Tova” was my aunt Binya (my mother – Rachel’s elder sister). With the customary blessings and good wishes that “your prayers will be received in heaven” and wiping a few tears from the eyes, the celebration ended and each one turned to his way and place of prayer. 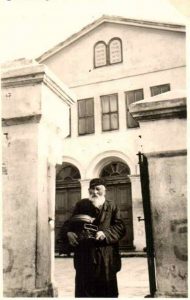 When you went out into the street, in the direction of the synagogue, you saw masses of people with their families, each one going to his own house of prayer, and at a certain moment you could think that the city was emptied of its inhabitants and that it closed itself in the prayer houses. Even the Goyim knew that the Jews had a holy day. (It should be known that half of the population in our town was Christian). With all the anti-Semitism of the Gentiles, they knew how to appreciate the sanctities of religion. We witnessed with Bonti’s family (the grounds man of our house).

The text of the Rosh Hashana and Yom Kippur prayers in the Great Synagogue was the text of Ashkenaz. In all the other houses of worship, on the other hand, they prayed “Seder Sefarad”. I only knew that the difference is only in the ‘sanctity’ prayers, i.e.: during the Morning Prayer at the Great Synagogue they said, “Sanctify the Name” and in others “Nakdishcha VeNaaritzcha”; In “Musaf” prayer in the Great Synagogue they said “Naaritzcha VeNakdishcha” and in others “Keter”. There were changes, of course, in other prayers and liturgy, but each person prayed his own way, and it took nothing away from his pleas and prayers.

The division of the place of prayer for our immediate family was like this: My grandfather Abraham prayed in the Talmud Torah where my grandmother, Perle, prayed as well. My mother also prayed there all the years since she married my father. My mother’s father, Shmuel, prayed at Levin’s in Kocnobskigo Street (A.k.a. Szpitalna Street). As I recall, there was no separate place for the women’s prayer (Ezrat Nashim) in this place. For that reason, I can not exactly say where Grandmother Chaya Leah prayed. Uncle Liibtzh, aunt Binih’s husband, always prayed, as I recall in the Great Synagogue and had a permanent seat.

My father switched synagogues several times. At first, since I can remember, we prayed at Minsk Hasidic shtibl. I do not remember for how long. I think we also went to pray in the Great Beit Midrash. What I do remember clearly, are the last years before the war – in the Great Synagogue in our town.