Why was cantor Zofowitch chosen? I do not know, I only know that after his election the city knew happy times and scandals. The joy came from the fact that his days of prayer became days of joy, and the scandals stemmed from the fact that not all the city’s leaders were pleased with his choice. What do I mean? One must know that the composition of the worshipers in the synagogue was homogeneous. First and foremost it was necessary to take into account the special status of the “Dozorim” (the Polish word – supervisor). They, the inhabitants of the eastern wall, had the first and last word, and according to them almost everything was judged. 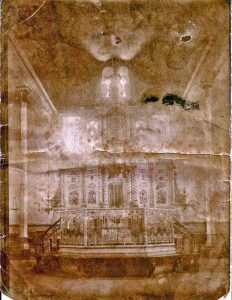 Second class was held by the rich (and the “Dozorim” were almost all of the rich). Another class was those who supported or opposed the special form of prayer of the new cantor. The only drawback (perhaps) of Cantor Zofobitz was his roundly stature, (The previous Cantor, Fasobski had a beard and was tall), and being almost shaved, though not entirely, because a goat’s beard adorned his chin. Since the synagogue’s worshipers payed attention to the appearance of the Cantor, the spirits raged.

What can I say? The majority won. And who was the majority? All those who wanted to hear the wonderful prayer of Cantor Zofobitz. These four or five pre-war years turned the Great Synagogue into something special. The prayers had special added glory when the choir joined in, singing hymns.

I remember a Jewish conductor named Sfilfidl (actually the second conductor for a good number of years, I do not remember how many exactly). As a child who loved music and especially poetry, I envied children who sang in the choir. It must be known that they also received a minimal wage for singing, because the many rehearsals took a lot of their time, and all the singing exhausted their strength.

Any prayer, whether a Friday night prayer or any other with the cantor and the choir became famous. I remember that Cantor Fasobski  had a number of singers, which he personally conducted during the High Holy Days. With Cantor Zofobitz, every prayer became an operatic display.

Previously, that is during Cantor Fasobski’s time, the synagogue was full, but now the aisles were filled to overflowing. A terrible crowding. The entrance was blocked with people, the prayers are was crowded and the steps to the synagogue were overflowing with people. Who was in this crowd? Who was not? All the Hasidim and the opponents who finished their prayers earlier. You will not believe it – even pure Gentiles wanted to hear the singing and the prayers. You’ve often heard heart-rending cries of people fainting and getting them out of such a crowd was almost impossible.

I mentioned heartrending cries here. This concept should be added to the phenomenon we knew in the Diaspora. While reading the Torah: crying women would enter the synagogue and turn right to the Ark, asking for mercy for their relatives, lying on their deathbeds or tending to die, or a difficult labor. There was something unusual going on at this time. The whole audience would fall silent. The reader stopped reading the Torah and everyone joined in his heart the pleading of the weeping women and wished that their begging will come to the throne and Seventh Heaven.