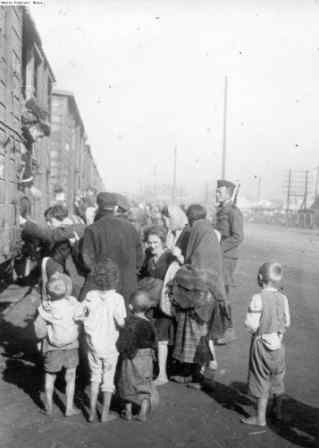 On August 22nd 1942, Saturday, T. Elul Ts”b, at midnight Germans, Ukrainians and Polish police have surrounded the ghetto. In the morning, all Jews were deported to the old cemetery near the synagogue. A selection was made, separating those able to work from others. In the triangle formed by Sokolov Street, Aoslnobitz’h and Targobh the “small ghetto” was created, and about 500 Jews were transferred there. About 1,500 more entered surreptitiously. A few thousand Jews were shot dead in the cemetery.

After waiting for hours in the heat without water or food, some 10,000 Jews were taken on August 23rd 1942 to the train station and then transported to Treblinka.

On August 24th 1942 the ghetto’s hospital was liquidated. German and Ukrainian gang, led by the commander of the city, Faibish, burst into the hospital on Daloga street and shot the sick in their hospital beds, including ten newborn babies. Doctors, nurses, paramedics and all the other staff members were taken to the yard and were shot.

On November 25th 1942, Tet-Zain Kislev Ts”g the “small ghetto” was liquidated. About 2,000 Jews were deported to Ganesha-Barqey camp. 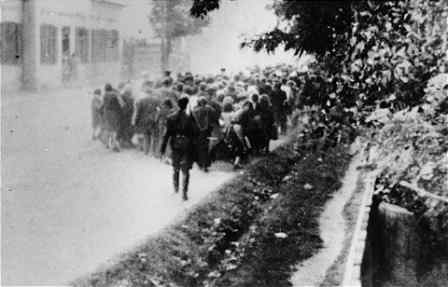 On November 30th 1942 the last 2,000 Jews in Siedlce and its surroundings from Ganesha-Barkey (surrounded by German, Ukrainian and Polish police two days earlier) were marched to the railway station and transported to Treblinka. This is described in the book by Elimelech Feinzilber: “Oif di ruins von Mein Heim”, p 137:

“On the morning of Monday, November 30th, the miserable were taken out, ordered in ranks and the march began, the tragic parade of the remaining Jews of Siedlce on their last journey. 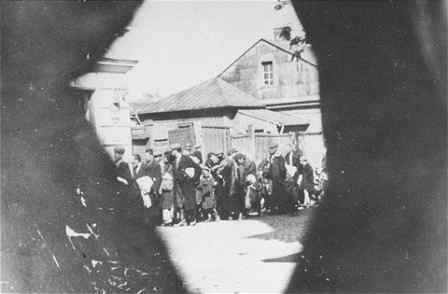 The remainders trailed as if in a long funeral. They marched, half-dead, on their own funeral. Marching at the head of the procession – old Rabbi Itzhak Nahum Weintroib, who served the congregation with all his heart and soul for fifty years, and never left it alone even in the last moments on the brink of the grave. He advanced upright and full of pride, his eyes blazing. Pale face flushed from the blazing fire in his soul now. His hair and beard silver bleach even more now. His blue lips scarcely moving and mumbling softly. He was used to always talk to the congregation, saying something to his brothers in every opportunity they gathered together, if Yoma D’pagra or holiday, in Community and  synagogue meetings – surrounded by the old men, who had survived and the perpetrators of the massacre carried out until now, all wrapped in white Kitlim  and shawls. They look, old Rabbi Itzhak Nahum and his escorts, as if preparing for a big gala event and important, sacred and noble task.

The cold burns. The wind whips the face mercilessly, tearing the skin. The ground is covered with a thick layer of snow and ice. Bloodthirsty sadists taking advantage of the last chance for them to abuse their miserable victims and they are forced to sit on the frozen ground. When the old men sat on the ground in their white Kkitlihm they slapped one another,and in the horrible frost Rabbi Itzhak Nahum took out – according to the story of the Leib Manolboim – a gin bottle and a glass, and poured each of the old men so  they could drink “LeHaiim” and wish one another to meet again in a world of good, and wished a bitter end to the  executioners”.

Thus came to an end 400 years of glorious Jewish history.