In 1923, at the initiative of the writer of these words, a branch of the “TA’Z” Association for the health of the Jews was founded in Siedlce.

The branch’s budget was based on member-fees of about 800 people, and was aided by revenue from events, and the assistance of the local Jewish community and the center in Warsaw.

Our branch declared war on ringworm fungi and tuberculosis; both diseases were very common among children. Fighting ringworm the Society has conducted systematic testing of all students in schools: “Tarbut”, Jewish elementary schools, Talmud Torah and Polish-Jewish state schools. The tests were conducted by Dr. Pao. She referred the kids to x-rays’ treatment, commonly used to cure this disease at the time, and it was done under her supervision at the Siedlce Institute of Radiology. In severe cases kids were sent for treatment in Warsaw, all at the expense of our town’s “TA’Z”. Dr. Pao fulfilled her duty with great devotion in the ghetto as well. She provided medical help to all and took care of typhus patients, despite the lack of disinfectants in the ghetto.

Based on its experience with Jewish children Siedlce’s “TA’Z” influenced Polish school doctors to join the struggle and test Polish children. When “TA’Z” commenced operations, the rate of children sick with ringworm and fungi was about 30% of all students. After three years of treatment the diseases almost completely disappeared.

The number of children TB patients was also high and they faced risk of infection by their parents or other family members. Here, too, “TA’Z” took swift action. A list of all children exposed to the disease was compiled. During the winter months a dozen children were sent to a “TA’Z” and “TARBUT” sanatorium. Parents of children at risk were instructed how to minimize infections. 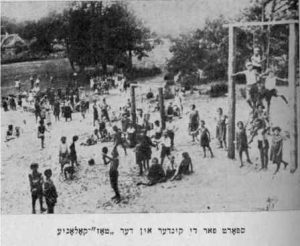 Summer camps took an important role in the fight against tuberculosis. At that time, only the children of the wealthy could enjoy a stay in the sun, in a field, in a forest and in fresh air. The poor boys stayed in the narrow room of his home or on the dusty street even on hot summer days. After the summer holidays, the boys returned to school even weaker. In the summer months many diseases spread among poor children. “TA’Z” has arranged summer camps for these children, and each year, during schools’ summer vacation, hundreds of children went to camps, fields and forests. Sports exercises outdoors strengthened their bodies and gave them a healthy sun tan. Camps also taught the children how to maintain personal cleanliness – wash with soap, brush teeth and so on. They were taught to live in society, to consider the needs of other children and act friendlier to each other. Sub-camps were organized for children who had no place in the closed camps outside the city.

Feeding the children was a community concern also. From 1925 until the days of the Holocaust, 1,000 children received extra feeding at school – a light breakfast, which included a roll and a cup of cocoa. The “Women’s Circle” was established for that purpose, funding approximately 30% of the budget and making sure that the meal will be distributed to all children.

Heading the “Women’s Circle” was Dr. Schleicher, and assisting her were Ester Zaltzman, Pliya Herschel, Pua Rabinowitz, Lea Tabakman and others. “Women’s Circle” also sent a few especially sick children to a sanatorium each year, covering the expenses by organizing public fundraising events.

In 1932 “TA’Z” has taken over the management of the Jewish hospital, and introduced the most modern medical equipment. The society has funded 40% of the hospital’s budget, and the Jewish community and municipality – 30% each. The hospital housed several departments. The internal department of the hospital was led by Dr. Glazobski, with an outpatient clinic employing doctors-specialists; a gynecological department was founded, led by Dr. Lebell, which was very popular among women. All women due to give birth, from all walks of life, tried to be there for labor. The department’s reputation was also known out of Siedlce, and pregnant women from neighboring towns came to give birth at the Jewish hospital.

“TA’Z” also conducted preventive informational campaigns among Siedlce’s Jewish population, concerning diseases and the importance of residence’ cleanliness. The lectures were given by local doctors and those who came especially from Warsaw: Dr.Wolman, Dr. Levin and others.