When World War I broke out, the Russian military command of the area headed by General Danielov was located in Siedlce. The Russians were about to deport the Jews, for it was a combat zone. Thanks to the intervention of Jewish public figures, they retracted their intention. The Russians withdrew from Siedlce in August 1915, not before they brutally looted Jewish businesses. The German army entered the city and took their place.

The occupation of Siedlce by the Germans brought about a significant deterioration in the economic situation in the city. The inhabitants were drafted for forced labor for the Germans and were paid very little. The number of Jewish craftsmen was greatly reduced. The number of employees in the footwear industry fell by more than 25%, and in the tailoring industry 90% had to abandon their profession.

Economic hardship was accompanied by epidemics in the city, typhus was the worst one. Only three of the nine doctors who had lived in Siedlce before the war remained. Wounded soldiers, Germans and Russians, and non-Jewish patients were also hospitalized in the Jewish hospital. The Jews of Siedlce founded “Health,” a company that accepted the care of incurable patients, and the “Ahiezer” company, which distributed food to the needy. According to the estimates of the Zionist Organization in Poland in 1918, some 5,000 Siedlce Jews needed support.

During the war more than 2,000 Jewish refugees came to Siedlce, mostly from Eastern Poland, and the city established a special assistance committee. The committee established school rooms for the children of the refugees, and money was collected for the purchase of food and clothing for the needy. The labor unions of the workers’ organizations were particularly active. At the beginning of 1916 they collected about 1,200 Rubles, with which they set up a communal kitchen where 300 meals were served daily for a symbolic fee.

At the same time political activity of the Jewish parties expanded in Siedlce. The religious citizens established “The Talmud house” society, which later split to the “faithful in Israel”, which grew “Agudat Israel”, and “Tvuna” of the moderate Orthodox, which focused on teaching general subjects together with Hebrew, Polish and German, and most of its members later joined “Ha’Mizrahi” faction. In 1916, Mordechai Meir Landau founded the first Zionist Committee of Siedlce, which ran Hebrew courses. 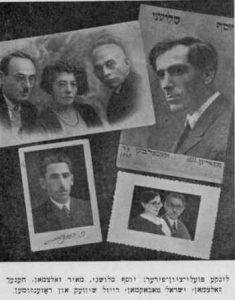 The Balfour Declaration in 1917 encouraged the Zionist activity in Siedlce. “Poalei Zion” renewed their activity, and a branch of the “Tzeirei Zion” movement was established in the city. Even members of the “Bund”, the movement suffered a huge blow during the events of 1905-1906, resumed activity. The “Arbeiter Heim” Workers Club which had 600 members was established in the city. Members of the “Bund” left the movement resisting the cultural activities of members of the “Poalei Zion”, and established their own separate “Beit Poalim”.

Jewish activity also encompassed the field of education. In 1915, the community opened a four-classroom “Cheider Metukan” called “Torah V’Da’at”. In addition to studies in religion and Bible, studies included subjects such as Hebrew, arithmetic, painting, Polish and Jewish and general history. A number of private “reformed rooms” were also established, and a six class Jewish elementary school taught a few dozen children from the poorest parts of the city in Yidish. In 1916, the school expanded and accepted the many refugee children arriving in Siedlce during the war, especially from Brest-Litovsk (Brisk Lithuania) and Pinsk. In 1917, the affairs of the school were handed over to the Cultural Affairs Company “Yiddishe Kunst”, and were operated by Yiddish education supporters among the members of the “Bund” and the “Folkists”.

During the war, four kindergartens were established in Siedlce  – “Herzliya”, on behalf of the Zionist groups, the other named after of Rabbi Reines sponsored by members of the “Mizrahi”, and others have been established by the “Bund” and “Folkists”. On Lag B’Omer, 1917, the Zionist organizations organized a mass rally for about 800 children from schools and kindergartens.