In 1902, the “Tehia” (Rebirth) organization was founded in Warsaw. The organization was headed by Iitzhak Greenbaum, Jan Kirsrat, Yosef Shprintzak, Zelig Weitzman, M. Horowitz, Jacob Alswanger, Noach Pryłucki and others. A branch of the organization was opened in Siedlce and was led by M.Landoi, Moshe Tzoker, Moses Grinfarb, Peretz Kamar, the Niidz’ooidz brothers, Dr. Moshe Temkin, Isaiah Zeidentzweig, and others. The Siedlce and Bandin branches where considered the most successful in Poland.

“Tehia” dealt in the sale of ‘Shekalim’ (a shekel owner has earned the right to elect and be elected to the Zionist Congress), carrying out collection appeals on behalf of the JNF and more. The organization aimed to  fight pogroms, and to this end purchased weapons in Warsaw. A group of young people – ” Sekalim distribution group”, led by Fishel Popowski, Elimelech Hinsdorf and Yaacov Ridl has spread the Shekalim among the young, who paid for them during the year – one Kopek per week. Fundraising for the JNF was done by selling stamps, sold at weddings and celebrations.

In 1904, the committee of the Zionist synagogue decided to open a Hebrew school in the city. Gurevich and Kaplansky, both active teachers in the school have also helped Zionist activity. Gurevich, a  sympathetic young Lithuanian man who was familiar with the current events and ancient history alike, especially excelled in it. In his mild, matter-of-fact language he spoke to the heart of all and had a great influence on the masses. After a while he left Siedlce and was appointed principal of the Hebrew Gymnasium in Vilna.

An awakening of all the Jewish parties was felt in the city. Apart from the “Tehia” and “Bnei Zion” parties  “Poale Zion” was also active’ led by Moshe Fechter, Sarah Kaplan Masmiatitz, Gabriel Shlechter, M’ Stwinklaper  a.k.a. “Motel Hasid”,  David Aorz’ac and Lioba Aizenstat.

The “Bund” was also very active. In 1906, during the pogrom in Siedlce, the Zionist Yitzhak Nahum Weintroib led the delegation to the governor. 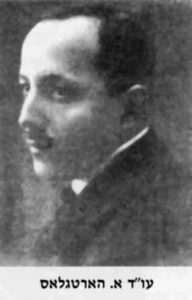 In the same year Attorney Apolinary Hartglas has settled in Siedlce – adding extra Zionist power, increasing the ranks of the movement. Although he spoke almost entirely in Polish, which the adult audience barely understood, thanks to the easy and comprehensible language he used – his lectures were welcomed, and everyone flocked to listen to him. He especially influenced the “Amcha” (the common people). He had special success with the Hasidim. His appearances in the municipal council of independent Poland, on behalf of the Jewish faction, always left a strong impression, not only on the Jews but also on the Poles. Everyone saw him as a brave and fair fighter who did not forgive injustice even if it harmed non-Jews. One of his most memorable acts was during World War I when a German gendarme killed a dog in the street and ordered a Polish student to remove the carcass. Hartglas went out to protect the honor of the student – how did this gendarme put him in such contemptible work? Hartglas was tried before a military court, and Polish lawyers came to his defense. When Hartglas was chosen to the Polish Seijm, on behalf of the Biala district and left Siedlce, the local Zionists lost a special and extraordinary representative. When he moved to Israel, he headed the legal department of the Interior Ministry in the 1950s.

In 1907, Mordechai Meir Landau and others’ has established “Kupat Milve Ve’Hisahon” (loan and savings fund). Later, the fund received the name “Bank Aodz’alobi”, and was directed by Nehemia Malin the Zionist. He served as chairman of the Association of craftsmen in Siedlce for many years, whose members included Zionist activists Shmuel Warman, Aharon Mardasci, Yehuda Vada, Moshe Laterman, Meir Perla, Paltiel Sloshni and Baerl Serebnik. They exerted their influence on their colleagues, until almost all the members of the society became Zionists.