In 1884, when the Biluim made Aliya to Israel with the slogan “Beit Yaacov Lehoo Ve’Nelcha” (O house of Jacob, come ye, and let us walk), and “Hibat Ziyon” movement was founded in the Katowice conference, a secret meeting was held in Siedlce, at the home of Rabbi Yitzhak Nahum Weintroib, to advance the establishment of a branch of the ” Hibat Ziyon ” in the city. It should be known that secret meetings under the czars regime risked all participants with deportation to Siberia. Moreover, at that time it was an expression of courage, a real revolutionary measure, to gather and talk about the Land of Israel! Especially since these were not young kids at random, but people with families, young Hasidim who sat in synagogues and Batei Midrash and learned Torah, and with them educated men, merchants and craftsmen.

Among the participants of that meeting, along with the initiator, Rabbi Yitzhak Nahum Weintroib, were: Moshe Goldberg, R. David Iiziks Yitzhak-Meir Rapaport, Yehoshua Goldfarb, Moshe Aba Eisenstadt, Shimon Baer Mintz, Berl Kahane, Fishel Frenkel, Shmuel Tzooker and others. Since then, every Friday night, they would gather at the home of Rabbi Yitzhak Nachum Weintroib, discuss current affairs, read a pamphlet, if any has arrived, and discuss collecting money for the settlement of the Land of Israel.

Yitzhak Nahum Weintroib was in fact the father of Zionism in Siedlce. Since he married and came to the city in 1878, and until his death in 1942, he had not missed an opportunity to awaken the public to Zionism. When he appeared in front of an audience he was basing his speeches on Midrashim, on the sayings of Chazal, on the verses of the Bible and on the speeches of his teacher, Rabbi Shmuel Mohelever. Even when he studied in the synagogue of the Gur Hassidim together with Rabbi Moshe Goldberg, later in the Beit Midrash of Israel Yechiel, and much later in the large municipal study hall, he always mentioned the Land of Israel and tried to make the Zionist idea familiar to more and more people.

When Y.N. Weintroib became a big merchant, he did not stop learning a page of Gemara every day, and even found time to read books from both old and new literature. He had understanding of the soul of the religious Jew, the scholar, and that of the Jewish freethinker, always trying to calm tensions between the two factions. This religious trader has invested a lot of mental work and resources getting permission from the governor of Siedlce to open a library in the city, and at the same time – he was a firm believer in “a healthy mind in a healthy body”. Every day, early in the morning, both summer and winter, he would walk to Raskos, where his estate was, and do his physical work in cutting wood for firewood.

Y.N. Weintroib has never denied a request for charity or a bank guarantee, and gave a great deal of money. His ear was sensitive to human suffering, he listened intently to those confessed their problems to him, and when a decree had to be canceled, affecting one person or the general public, he did it with true devotion. We saw it during the pogrom in Siedlce, when he went with Rabbi Shimon Baer Analik, Moshe Temkin and secretary of the Jewish community Tz’atz’kes, lobbying local authorities to stop the shooting, while bullets whistled overhead. After the First World War, when the military court put Polish Jews on trial for allegedly helping the Bolsheviks, Yitzhak Nahum Weintroib ran with Rabbi Israel Gutgold to the local authorities to rule out the plot and cancel the decree.

There was no enterprise or institution that didn’t bear the marks of Yitzhak Nahum Weintroib neat and organized hand. He kept records of any event in the lives of the Jews, whether of great importance or minor. Even during World War II, when he was already an old man, broken and battered by personal disasters, he continued to collect material to write about Jewish life and its demise in the days of horror. But unfortunately, he destroyed all records in his own hands, at the last minute before leaving for Treblinka.

World War II landed in all its terror on the head of this noble Zionist activist. The first tragedy struck him on September 2nd 1939, when his daughter Frieda Landau, together with Yablon and Zaltzstein families were buried under the rubble during the German bombing. The heart is broken at the sight of the old Weintroib himself standing and digging, trying to rescue his loved ones from under the ruins. The pain intensified when, in a second disaster, his grandson has perished, Adv. Yossef Landoi, with his wife and children. He himself lived with Shmuel Grinshpan in Ganesha Barqi until the latest action in November 1942. He did not live to fulfill his ambition of immigrating to Israel and fulfilling the oath he swore at the open grave of his son-in-law, Mordechai Meir Landau, that he would take his bones there with him. 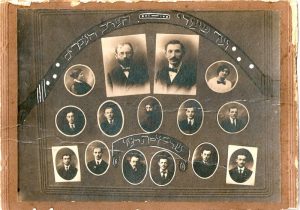 Let’s acquaint ourselves with the participants in the first Zionist meeting in Siedlce.

Moshe Goldberg was born in Zamosch and came to Siedlce following his marriage to the daughter of Rabbi Shmuel Brokars, a distinguished landlord. He studied together with Y.N. Weintroib and was a enlightened Jew and a successful merchant. He was a bank owner along with Yehoshua Goldfarb and one of the founders of the “Kupat Ha’Am” bank in Tel Aviv. In 1903 Goldberg was elected as a delegate to the Zionist Conference in Minsk.

Moshes Aba Eisenstadt was an important landlord in Siedlce, a decent merchant, a loyal Zionist and the son of Rabbi M’brazna. His two children, a boy and a girl, are in Israel. The son, Paltiel, was active in all areas of Zionist activity in the city as well, and until his departure for Warsaw he is one of the initiators of evening courses in Hebrew.

Shmuel Tzuker, a brick factory owner, a Varazdin Hasid and a proud Jew served for a while as a member of the City Council and reacted sharply to any hurtful comment made by Poles against Jews. In his last years he lived in Paris with his sons. He died in a car accident.

Among the members of the “Hibat Zion” movement, raising funds for the settlement of “Eretz Israel”, was a Yedidia Rainman, an educated young man who was well versed in literature and also a Torah learner in the synagogue of the Calabiel Hasidim. After his marriage to the daughter of Rabbi Michal Rosenberg of Brisk, Lithuania, he held a wholesale grocery store in Siedlce, and in 1924 he closed it and immigrated to Eretz Israel. A few years later he was frightened by a passing motorbike, fell on the back of his neck and died. His wife Sarah also worked to spread the Zionist idea in various circles in Siedlce. His two sons, Yaakov and Noah, perished in a tragic way.

In 1900 Mordehai Meir Landoi came to Siedlce. He married Frieda Weintroib and settled there. His Jewish and general education and organizational skills brought great vitality to the Zionist activities in the city. At first he established a Zionist synagogue, whose worshipers were loyal and devoted Zionists and artisans. His fellow leaders of the synagogue were Abraham Wada, Shmuel Worman, Joseph Zilberfadn, Meir Perla and Paltiel Sloshni.

Once, when a representative from the center came to give a lecture at the municipal synagogue, Rabbi Dov Baer-Anlak, a fierce opponent of Zionism, gathered around him some of the worshipers, among them fishermen and butchers. One of them tore off a candlestick from the wall and slammed it into Silberfaden’s head, knocking him to bed for a long time. This case has further strained active Zionist group members, who were now more active and increasing in volume.

Siedlce’s Zionist representatives at the 1903 All-Russian Zionist Conference at Minsk were Mosh Goldbrg and Yehoshua Goldfrab.

At that time a secretly library was founded in the city. Its founders were the Zionist Yosef Rozenwaser, better known as ‘Yosel Ben Ha’Hazan’ or Yosel-with-the-cigarettes, Zeev Tocklafr, Asher Livrant, Yehoshua Goldberg, Moses Grinfarb and others. Thanks to Rabi Y.N. Weintroib’s  lobbying efforts with the governor the library received a legal permit and was named after Weintroib’s  son-in-law – Mordechai Meir Landau. In 1912, the library was transferred to the “Shamir” company for Yiddish culture.