At that time, a branch of “Ha’Halutz” (pioneer) was established in Siedlce. Its founders were Haiim Socodolski, a man of the highest level who, despite his physical weakness was active and energetic and even paid short visit to the land of Israel; the student Gelbard, Adam Levita, Ada Berg who is in Israel, Kimmel – a Zionist activist who gave lessons to “Ha’Halutz Ha’Tzair” (the young pioneer) and served for a while as secretary of the JNF and was murdered by the Germans, Mottele Greenberg who immigrated to Israel and the student Angelman, who taught geography of the Land of Israel at “Ha’Halutz”. 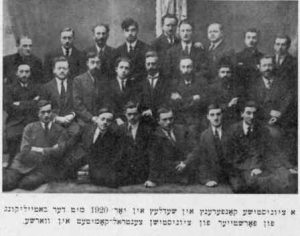 In 1916, Mordechai Meir Landau has organized the first Zionist Committee in Siedlce, which included: Y.N. Weintroib, Akiva Lortowski, Yedidia Rainman, Attorney Hartglas and others. In 1917 Landau has established the “DAT” (religion) education company, which ran schools that taught Hebrew and Yiddish and courses for adults during the German occupation in World War I.

Elsewhere, it was told, that in 1919 the brothers Bonim and Berl Weiman, the owners of the “Brasksh” brewery, has donated an extensive area of land to “Ha’Halutz” where the first training farm in the region was established. In order to develop the farm, special shares were issued and many pioneers underwent their training there before their immigration to Eretz Israel.

In later years a “Kibutz” was also founded, and its members – pioneers from the surrounding area – engaged in various types of physical labor in and outside the city. Members of “Ha’Halutz” also worked for the Paritz of the Patricas estate.

With the development of the local “Ha’Halutz” branch new forces were discovered: Alter Boaz Huber, Elimelech Heinsdorf, Rachel Tenenboim (Rybak) and her husband Yehuda. All of them immigrated to Eretz Israel. 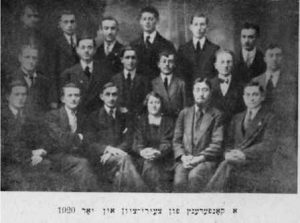 The second conference of “Tzeirei Tzion” was attended by representatives of most of the cities listed above. On behalf of the Center participated Barzily, who later found his death by drowning in Lake Kinneret.

It is worth mentioning Elhanan Lewin – one of the most important Zionists at the time. He found it difficult to speak Yiddish, at first, but since he was very talented, a genius really, he quickly acquired the language and was very successful in all his performances, especially when arguing with left-wing views. Later, when he worked as a lawyer in Warsaw, he was one of the main leaders of the Revisionists in Poland.

We have already mentioned the newspaper “Sadlatzar and Oacanblat”, which was initiated by the Zionist Committee in 1922 in order to serve as a public Zionist platform in the city. Furthermore, the initial consultation prior to issuing the newspaper involved twenty people including Yosef and Levi Gotgeld, Nehemiah Malin, Yehoshua Akerman, A”S Englander, Bonim Rotenberg, Yechiel Groman, Yehoshua Goldberg, Fishel Popowski, who later emigrated to Israel, and Solomon Socodolski (who emigrated to America). The participants committed themselves to donate 5 Zlotys per capita, and encouraged the operatives Yechiel Groman the editor, and Asher Livrant the publisher .

In the same year, just when some of the leaders of the Zionist movement left Siedlce, Dr. M. Schleicher came to the city. He headed the Zionist movement in the city, served as its representative in the city council and the community council and participated in fundraising events for “Keren Hayesod”, for “Tarbut” and many more. Dr. Schleicher devoted a lot of energy and work to the preservation of the Jewish children and schoolchildren health in Siedlce, served as chairman of the local branch of “TAZ “(the Jewish health organization in Poland), immigrated to Israel and set up residence in Haifa.