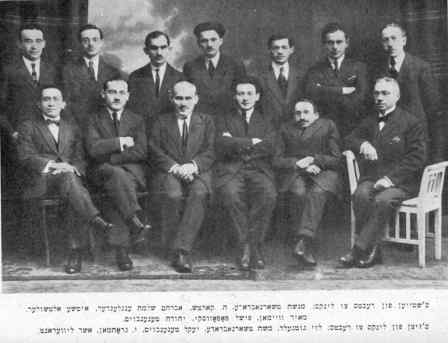 On August 13th, 1915, at the height of World War I, the Germans occupied Siedlce. These Germans are not comparable to those of World War II. The German army entering the city has caused some relief after the Czarist regime. During this period, organizations and public institutions, cultural and economical were established.

On the last months of 1915, evening Hebrew courses were renewed. These courses have attracted hundreds of young people from all sectors of the Jewish population, and thanks to them poken Hebrew could be heard in the streets of Siedlce. Occasional readings and lectures in Hebrew took place as well, as literature and music, attracting large audiences.

Pltial Aiizenstat has already been mentioned when we talked about his father, Moshe Aba. Now his closer friends deserve better acquaintance. 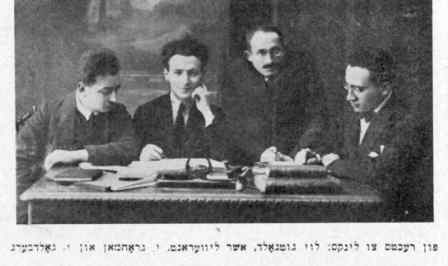 Avraham Slomo Anglander, the son of a Jewish landlord, and with Zionism awareness, was an unhealthy person, but every time that he was out of bed was devoted to Zionist affairs. He was a member of the Board of Zionist, for some time been an authorized JNF representative and worked in the center of the Jewish National Fund in Warsaw. In Siedlce he ran the soup kitchen, was the secretary of “TAZ” – the Jewish Health Organization in Poland, and eventually worked as a bookkeeper at a Jewish Hospital. All his life he aspired to Israel, but did not achieve it. He died in the ghetto.

Moseh Akerman was a son of a Hassidic family. His grandfather, nicknamed Matitiahoo Kozk, was a devoted “Hsid Kotzk”. Ackerman worked for a while in the offices of “Ha’Halutz” in Warsaw and imigrated to Israel in 1924.

Esther Gotglik came to Siedlce from brisk, during the First World War, after the Czarist army command expelled all the Jews.

Levi Gotgeld was the son of very wealthy Hasidim – Israel and Saraleh Gotgeld . When he was three his father wrapped him in a prayer shawl and carried him to the “Cheider”. As he began to study Bible, and at the age of thirteen with the advent Bar Mitzvah, the parents gave him a big party – Celebrations for Children, in which they gave the attendees bags with sweets and meals to the Hasidim, who danced and brought joy and happiness until late at night. The father, who did not want his son to learn together with other children, had a private “Melamed” fully paid as well as two teachers of general studies; Akiva Goldfarb the Hebrew teacher, and Moses Grinfarb the Russian and Polish teache. Influenced by Grinfarb , Levy began to read books – without the knowledge of his father, of course. Among others, he read Mapo, Smolenskin , Fireberg and Bialik. He became interested in Zionism, participated in Zionist circles and made friends with Mordecai Meir Landau. The Zionist idea has conquered him completely until he became one of the pillars of the Zionist movement in Siedlce. He was present at any meeting or consultation, and became the keynote speaker in nearly every case. He was always a member of the Zionist Executive committee, while giving up the honor of the role of Chairman to others.

Levi Gotgeld was also a man of the book. He was the first reader of every new book, and enjoyed standing in the library and advising all friends and acquaintances which books to read. For a while he dealt with distribution of the Hebrew Books and found satisfaction, not just in profits, but by having the book reach the home of the reader. When the library wanted to purchase books Levi operated as the buyer, since all knew that thanks to him the library will receive the most interesting and important books.

Even in middle age Levy remained young spirited and did a lot of work with the youth, especially learning youth which he taught. For a while he worked as an instructor in evening courses sent on behalf of the Central Committee of the Zionist movement in Warsaw. He also accompanied all those who went to Palestine; he would travel with them to Warsaw, help with travel arrangements and accompanied them to the train station as loyal and dedicated friend.

Among his other pursuits Levi Gotgeld also functioned as the executive editor of the “Sadlatzar and Oacanblat” – the magazine of Siedlce, although the official editor was initially Yehiel Groman, who immigrated to Canada a short time later. Gotgeld often  filled the whole magazine by himself, and it was very rich in content and related to every aspect and event of Jewish life in the city. Levy participated in the Warsaw newspaper “Haynet” – today, and was one of the founders and devoted operators of “Tarbut” school.

In the years before World War II, Levy directed the “training and immigration department” in the Palestine Office in Warsaw. He and his wife Tzlooh, daughter of Israel Zaltzstein, raised a beautiful daughter. When the war started Gotgeld planned to immigrate to Israel, putting all documents and papers in order, but unfortunately was not able to get out. When Italy joined the war it was impossible to leave Poland. During the German occupation Levy lived in Warsaw, and as told by Hillel Zeidman in his book “The Warsaw Ghetto Diary” The Germans took him from his home on the 40 Alktorlno Street on Yom Kippur of 1942, and sent him to Treblinka.

Altr Gladman was the son of a Jewish scholar, a devotee Radzin Hasid. During World War I, when the Russians left Siedlce, he went away with them and we know nothing of his fate.

Hanc Zaltzman, a student of the Polytechnicum institute, was the son of a member of the “Poale Zion” veteran, Meir Zaltzman.

Yehuda Tenenboim was the son of Isaac, a teacher of religion in schools and for a certain period – the secretary of the Jewish community. Yehuda was a member of the “Ha’Halutz”, participated in various Zionist activities and the fundraising events. In Israel he was a member of Moshav Kfar Azar.

The brothers Mordechai and Baruch Yaffe, grandsons of Yeruham Schatz from Brisk, arrived in Siedlce as refugees during World War I, and took an active part in the work of the Zionist and public activity in the city. Baruch was a gifted speaker and would argue strongly with the leftist circles. He was a good friend, but always with serious face. Later on he left Siedlce, and became an instructor for the Zionist Central Committee in Warsaw, and traveled to the Zionist conference in London in 1920, where he acquired the English language. He immigrated to Israel from London and here he was Director of the immigration Department in Tel Aviv. 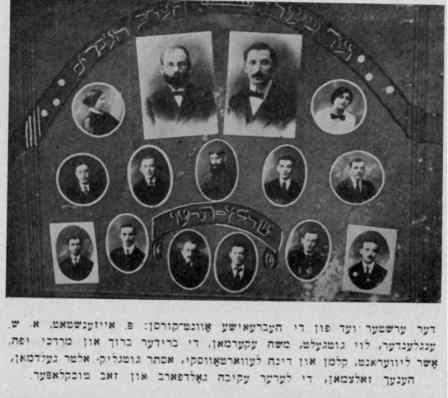 The other brother, Mordechai Yaffe, was always a cheerful man, friendly and kind. He participated in all the Zionist activities in the city and was also active in the field of general public affairs. He left Siedlce when he received the role at the “Joint”. Later he immigrated to Israel with his wife Shoshana and their two sons, and was a member of Ganegar group in Emek-Jezreel.

Asher Livrant, the son of Meir Livrant worked together with Yedidia Reinman for the Odessa Committee, and was in correspondence with Menahem Ussishkin and Yechiel Tschlenov. He was among the founders of the library in Siedlce and served as the librarian almost all his life. He knew all the readers and knew to give each one of them a book matching his intellectual level. He was also the Permanent Secretary and Minutes Writer of the Zionist movement in Siedlce. With the establishment of the Jewish National Fund, he held virtually all functions of the Executive Committee of the Foundation. He made sure to collect vows in the synagogue, distributed stamps of the JNF and organized to raise money for weddings and celebrations. Asher Livrant was the publisher of the “Sadlatzar and Oacanblat” since its inception in 1922, and since 1929 – also the managing editor. He carried all the financial burden of the newspaper, although an unhealthy person with sick and broken body. Even in the most difficult times of the newspaper, Livrant published it despite the difficult economic situation in his own house, and all with a pleasant smile. His piercing gaze forwarded his determination concerning the content of the newspaper which he brought immediately to writing in his weekly columns.

Asher always aspired to immigrate to Israel and prepared to fulfill his dream, but never achieved it. He died of asthma in the local Jewish Hospital in 1943.

Dina and Kalman Loortobski were the children of Akiva and Hava-Gitel. The mother was the daughter of a wealthy merchant, R’ Shmuel Groinm who was the Gabay in the Great Synagogue for forty years. His father was a Razdin Hasid, whose Rebbe vehemently opposed Zionism. Nevertheless, he was drawn by his children to the ranks of Zionism and was even a member of the local Zionist Board.

Kalman was a calculated and reserved person, but always achieved the goals he set for himself. He was one of the founders of the “Youth of Zion” in Poland and worked in the section “Ha’Halutz”. In 1920 he immigrated to Israel and took part in paving roads in the Galil, and was a teacher in the settlements. Later he changed his name to Bar-Lev, wrote in “Koontras” pamphlet, and from 1927 – in “Davar” newspaper. He was a member of Kfar Azar. He died in October 1942, leaving a wife, a son and a daughter.

The Hebrew teachers at that time were Akiva Goldfarb, Zeev Tocklafer and David Niimark. The latter, a Kock Hasid and the son of a Melamed, known for his sharp thinking. He advocated Zionism only for a short time and moved on to the “Bund”. He wrote in “Falkstziitong” – People’s Daily – using the nickname of “Arie”, and even after immigrating to America remained loyal to the Polish “Bund”. He participated in “Parvarrts” (forward) newspaper – and published anti-Zionism articles in the Bundist press.

Akiva Goldfarb was a devoted lover of the Hebrew language. He taught the language from morning until night, at home, at school, in the homes of well-educated and followers. Everywhere enthusiastically spreading the Hebrew language he saw teaching as an ideal worship. His wife, mother of two children, was an unhealthy woman, and yet, even though it was his only source of income, he never firmly demanded  the tuition fees he deserved, as it was enough for him that people learnt Hebrew.

Zeev Tocklafr was one of the first Zionist “gang” members in town, and even went to visit the land of Israel. Upon returning in Siedlce, he was asked to join the local “savings and loan fund”.

Among the Hebrew teachers was also Har-Zahav, a distinguished educator, author of many books of pedagogy. In Israel he was, for many years, a proofreader for the “young worker” print shop, and in later years he lived in a nursing home in Holon.

Another one of the teachers was David Morgenstern, who managed a “Cheider” and also gave private lessons in Hebrew, and Joshua Greenberg and Matityahu Iawerboim, who were also distributors of the Hebrew language in Siedlce. The children of Iawerboim – Mordechai and Sarah are in Israel. His son, Simcha, was killed in a car accident while serving in the IDF.