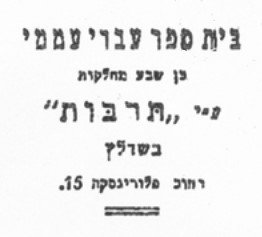 It is commonly believed that the opening of the first school of “Tarbut” marks the beginning of the Jewish education system in Siedlce. However, as mentioned in another chapter, a Hebrew school already existed in Siedlce in 1904, when a group of Zionists brought to the city the teachers Gurevich and Kaplansky and they, with Akiva Goldfarb and David Morgenstern, established the first Hebrew school here.

The school resided on 10 Fiinkna st. and occupied the entire area of the top floor, where about 180 children attended, all children to Zionist parents, who maintained the school by their own means, without any external help. Gurevich and Kaplansky have also conducted evening courses for adults, and Hebrew began to be heard in the Jewish street.

“Da’at” Hebrew school was opened in 1917 by M. Landau, but it did not last long. Several “Cheider“s also operated in the city by: David Adler and Samuel Moses Ibkowitz, and Friznt and Berkowitz. The last time has later become ”Yavne” school of the “Mizrahi” movement.

There was also a school called “Torah and Da’at” in which the teachers were: Branzweig, Greenberg, Iawerboim and Zonshain. In 1920, the Zionist Committee opened a school using the Fröbel education doctrine, in which worked the Kindergarten Teacher Hana Keisar, who later immigrated to Israel and lived in Haifa.

The question of opening the school “Tarbut” was, for a long time, on the agenda of the Zionist Committee. The matter was postponed again and again unfortunately, because every time they tried to move into action they lacked the initial 100 Zsolti needed to start the wheels in motion.

Under the initiation an funding of Fishel PoPowski (Dromi) a limited committee was elected, tasked with the mission of establishing and opening the school. The members were: Levi Gotgeld, Moshe Yom-Tov, Iehoshua Akerman, Fishel PoPowski himself, Abrahamtz’e Altenberg, and the secretary was Meir Tenenboim, who served in the post for a long time. Members of the Initiative Committee went to Warsaw to recruit the staff.

In 1926, the Hebrew school “Tarbut” opened. It is worth mentioning some friends who took an active role in its work: Asher Herschel, Chairman of the school administration, a wise man with abundant maxims, a son of a religious Hasidic family and among the followers of the Rabbi of Forisob . He was learning Talmud and read books together with his brother in law, Naftali Naigoldberg, who managed a bank and later became a wholesaler of iron and also had a factory producing iron plows. Along with all of his activities in commerce and industry, Herschel devoted time for public activities: he founded and directed the “Merchant Bank”, headed the community for many years, and was an alderman and state taxing authority, functions in which he protected the interests of the Jews. Many times he left his private business and came to the rescue of Jews from paying heavy taxes. However, busy as he was, he always gave the school first priority.

Yehoshua Akerman , a dedicated Zionist activist, was a son of Kock Hasidic family and devoted himself passionately to Zionist public activity. Often neglecting his private business.

Iosef Gotgeld , the son of Rabbi Israel, has devoted many years to the development of the school. As the financial manager for a long time, he made sure to pay teachers their salaries, and made sure to do so even if funds were lacking. He also took an active part in working for JNF (K.K.L).

Moshe Yom-Tov, son of R. Berisz, a groceries dealer, trained in the “Ha’Halutz Ha’Tzair” and also worked in the League for Labor in Israel.

Traders Hanoch Ribak and Shalom Salzman, both prayed in Hasidic synagogues. They showed great interest in activities for the school, and it took many hours of their time.

The multi-talented and influential Zionist Fishel PoPowski (Dromi), one of the founders of the school “Tarbut”, worked for ten years as an instructor for the National Fund center in Poland. In Siedlce he was one of the community’s leaders, and took part in the managing commity of “Nightingale” Yiddish Culture Company.

An honorable mention goes to the Zionist activist  Dr. Bergman. During the German occupation in World War II, he survived and came with the Polish army to Israel. Even his wife, son and daughter came to Israel. The son fell in the War of Independence and the parents with their daughter returned to Poland or immigrated to Germany.

In 1933, when the Itzhak Caspi left Siedlce and immigrated to Israel, the management of “Ha’Halutz Ha’Klal Zioni” was enforced by: Elimelech Finezilber and Abraham Friedman. Together they held the Zionist youth club, and carried lectures about the history of Zionism and the geography of the Land of Israel.

In 1932, under the initiative of: Itzhak Caspi, Baruch Alberg , A”S Englander, Riddle and others, “Ha’Halutz Ha’Klal Zioni” was founded in Siedlce. The active members were: Elimelech Finezilber and Abraham Friedman. They held activities for the Zionist youth, and carried lectures on the history of Zionism and the geography of the Land of Israel.

Also should be mentioned and commended all the companies that have greatly facilitated any Zionist activities and all federations in the city, especially in organizing markets on behalf of the JNF, the Collection for KH (“Keren Hayesod”) and development of “Tarbut” school. These were: Mrs. Miryam Sibotzki, Ester Zaltzman, Pua Rabinowitz, Sarah Radzinsky, Hava Domb, Haniek Wyman, Tzlawa Zaltzstein, Hava Wakstein, Ms. Radosinski, Beila Finklstein, Rachel Gorfinkl, Genia Weiman and Yehudit Kooiatk.. Their blessed operations added another point in the definition of Siedlce as a “City of Zionism”.

In the second school year, 1928/9, Heller and Mlasen joined the teaching staff. The number of students increased to 250. The place in Polynsky Street became too small, and another building was hired down Fiinknh Street, at Sukenik’s home. The success of the school exceeded all expectations. It was considered one of the best in all of Poland. The school was growing by the day and appreciated by all segments of the population: followers, members of the “Bund” and even communists sent their children there.

In the school year of 1930/31 the first class of “Tarbut” has graduated, and in 1931 the school flag was raised. The weekly “Sadlatzar and Oacanblat” published a special issue on the occasion of the event, with articles written by the teachers and other school activists, and on one Saturday night a club dinner was held. The hall was packed, and many were forced to turn back when they could not enter the hall which was too small for all of them.

In the years before the Second World War, the school developed further and housed a more suitable building on 60 Pilsudski Street. The students attended 10 classes with a teaching staff of ten teachers, and toddlers went to a kindergarten. The school had a fine library, and there were a choir and drama group, which successfully staged plays of biblical stories and general culture.

During its three years of existence “Tarbut” school in Siedlce educated heroes and warriors. Some of their names are engraved in the history of the War of Independence of the State of Israel. Some of schoolchildren – sons of Popowski, the Cantor Psobeski, Steinberg, Lowenstein, Lieberman and others immigrated to Israel and joined the “Haganah”. During World War II, they joined the ranks of the Jewish Brigade and other combat units in Egypt, Tripoli, Italy, Belgium and Germany and fought with the Allied forces against the Germans.

With special respect we mention a few school graduates, who fought bravely and sacrificed their young lives for their people: Efraiim Weiman, Ziskind Rozenboim, Yehuda Konski and Hanoch Zlaznogora.