Immediately upon the establishment of an independent Poland “Bund” has begun to organize the Jewish workers in Siedlce. “Bund” established the trade unions at 14 Warsaw Street, the “Zukunft” (Future) association at 20 Dluga Street, the “Childrens’ home”, a cooperative grocery store and a library. The branch was headed by Moshe Altsholer, Yaakob Fishman, David Nimark (who later immigrated to America), Abraham Sloshni and Schalke Zebrowitz. Led by them, the Bund became a mass movement. Even the youth organization, while carrying the name “Youth Organization social democratic ‘future’ in Poland”, has grown and developed and already counted 500 members. The organizational was managed by Ezekiel Lobnlinrmn, David Kofrnt (who later immigrated to America), Sana Weinshelboim and Walter Naotz’itl (who immigrated to Argentina). 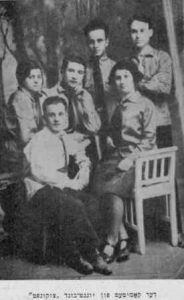 All these institutions which were established with great effort and did extensive work, professionally and culturally, were destroyed during the war between Poland and Russia in 1920. Siedlce’s Jewish activists were deported to the concentration camp Dombina, near Krakow. They returned to work after the war, when the Jewish public life arose again, but by then the Bund did not enjoy the large and beautiful theaters. The unions have settled on 7 Fiinknh Street, and despite the proximity to the GUR synagogue good relations were kept between them. The Consumers’ Association and the Library named after V. Medem were reestablished and new institutions were added: “Pinat Ha’Poel”, “Marganstarn” (Morning Star) sports club and “iogntbond Zukunft ” (Youth Bund – Future). This youth group had attracted youths from the remotest corners of Siedlce, and they felt like at a second home there. A separate branch of the youth organization was the “SKIF”- Society for Socialist kids, and it included children aged twelve and older, most of them students.

The Bund’s activity has become deeply rooted in Siedlce’s Jewish laborers. The general trade union movement’s leadership grew such power that it affected wages and working hours in footwear factories and bakeries. Before the Poland-Russia war it numbered 1,000 adult members. Young members operated in sections of their own, and Jacob Fishman served as secretary of the union.

The Polish-Russian war, followed by the terrorism of the reactionary Polish government, the economic crisis and the deprivation of skilled Jewish workers and ideological debates between members of the movement, all these destroyed the union in Siedlce. Bund’s most important activists moved to other cities. Ultimately, however, the Jewish parties found a common professional language, and various economic enterprises operated successfully. 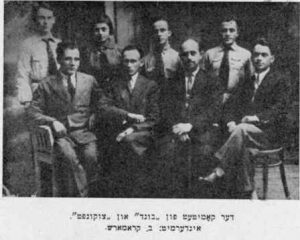 In 1927, two members of the Bund were elected to the municipality: Benjamin Kramz and Rachel Barg. Following the understanding reached between the PPS, the Bund and “Poalei Zion”, which constituted a socialist majority in the municipality, decisions were taken aiding Jewish day schools and to Jews in need by the municipality. PPS and the Bund would, in general, vooperate and march together on 1st of May demonstrations.

Two of the Bund also set in the HMO (Kupat Holim) management: Joseph Rozenzomen and Jacob Itzhak Leibman, who was the longtime secretary of Siedlce’s Transport Workers Union.

In 1933, the Bund won second plave in the elections for the community leadership. The four delegates for Community Council were Joseph Rozenzomen, Benjamin Kramz, Joseph Barge and Jacob Isaac Leibman.

In 1931 the Bund has received responsibility for the Jewish elementary school of Siedlce, which belonged before to the “Folkistim”.

Indeed, the Bund in Siedlce has worked constantly, and took a place of honor in public life and work in the city, until the murderous Germans invaded.