In December 1911 a printed journal saw light for the first in Siedlce, “Siedlczer Wort” – The Siedlce Herald, a skinny little booklet the size of a small Sidur. It was uncommon at that time as it was difficult to publish a magazine in Russia, especially in Yiddish, so the modest booklet was very dear to readers, despite the poor appearance.

The copyright was reserved to a lonely and sick man – Abraham Gilbert, a cousin of the famous writer – S. Gilbert, who came to Siedlce from another town. Gilbert brought a printing machine, “Pedal”, and a bit of the lead print-types, to open a printing press and try to make a living from it. Perhaps Abraham Gilbrt came to Siedlce because his brother, Moses, who taught Russian and was a respected member in “Agudat Achim”, which then played an important role in social and cultural life in the city. Even Moses was a man of abundant talents. He wrote poems, parodies, humoresques and articles relating to current local issues. He often would recite his works in literary evenings, organized by the association, and they were very successful. Often, with enthusiasm, the audience would carry him on their shoulders.

Since he had no job and source of income, Abraham Gilbert conceived an idea of publishing a weekly Yiddish magazine. After all – he had the required printing equipment, and he knew how to write. Gilbert revealed the plan David Niimark, an ultra-Orthodox man who learnt at “Beit Midrash”. Niimark later become active in “Bund” and a member of the editorial board of the Journal of the “Bund”, “Falkstziitong” (the peoples’ newspaper) and later, in New York, participated in “Forward” and “Der Waker”. Niimark revealed the secret to Y.H. Fishman, who will will later write “Summer Days” (Warsaw, 1938) and “wandering Jews” (Shanghai, 1948). The three decided to publish a magazine together. 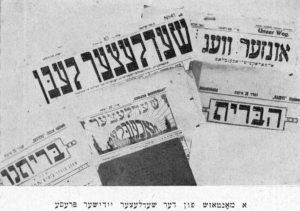 With many difficulties Gilbert has managed to bring his magazine to light. He had too little lead letters, and he had to do all the typesetting work himself. It was impossible to hire another person, as “the budget” would not suffice.

The “Sadlatzar ware” was born under such conditions. In the first issue Niimark set against the Yiddish culture club “Nightingale”, published a story translated from Hebrew by A.Miidnik and two songs written by Abraham Gilbert. Y.H. Fishman published his first story, “a Hasidic tale”, using the pseudonym Y.T. Lebowitz, and Itshe Altsholer also wrote a small article.

Printing took two weeks, as the publishers had typesets for half a sheet only, so each paper had to be printed twice. The second issue, published in 1912, included Jacob Tenenboim and Yehoshua Goldberg . The latter published his poem “Panorama of Siedlce”, depicted images of well-known public figures in the city and receiving positive feedback.

“The tale of Siedlce” was liked by readers, but not by the Czarist government. So the police came to the wretched print shop of Gilbert and confiscated the “forbidden goods”.

Abraham Gilbert did not find the courage to go back and do something. The pioneering task was undertaken by  Jacob Tenenboim, who participated in the second edition of a magazine. The newspaper reappeared, this time called “Sadlatzar and Oacanblat” (the magazine of Siedlce). However, because of his devotion to the newspaper Tenenboim has neglected his occupation and his income as a medic. Clients looked for help elsewhere, and he sought the help of Yehoshua Goldberg, although their relationship was cool, probably because of “writers’ envy”. At the same time Joel Mastboim came into the scene, making his first steps in writing.

Goldberg edited the magazine for three years. He has published articles relating to local issues and the series “teachers”, lasting for tens of issues. These are used as a non-failing source of folklore and information about Siedlce. To date, unfortunately, no magazines were collected and published in book form.

Later, with Gilbert’s help Tannenbaum has started a new newspaper, “Das Sadlatzar Leben” (life in Siedlce). The main article was written by attorney Apolinary Hatglas, a Zionist activist who lived in Siedlce and expressed his desire to participate in the newspaper. In the article “our shortcomings”, written in rather garbled Yiddish, he criticized the Russification of the Jewish intelligentsia. The same issue also included a story of Y.H. Fishman about the fate of the rabbi of Siedlce in 1858-1867, Rabbi Israel Meizlish, the son of the famous Warsaw Rabbi Dov Ber Meizlish.

After the appearance of the second issue the management of the newspaper went apart: Goldberg and Tenenbaum left and published their own newspaper, “Sadlatzar and Oidarkol” (an echo of Siedlce). Before the second issue of the new paper saw light, there was a minor sensation. Attorney Hartglas sent an article which raised great interest among all the Jews of Siedlce due to the severe attack on the anti-Semitic statements of Dr. Wansobski. The latter was an avowed anti-Semite, and in the Polish newspaper “GlosPodlaski” (the voice of Fodlaskh) he called for struggle against the Jews (He later became a liberal and fair towards the Jewish faith).

In Hartglas’ article, “hoisted weapons” while attacking Wansobski, the writer made a few unflattering remarks about the Jewish population and its behavior in some cases. These greatly annoyed Tannenbaum, and in the same issue he came to terms with Hartglas due to his abusive comments. Hartglas did not remain silent and answered Tannenboim in the next issue and proved hi wrong.

While his colleagues-rivals were bickering among themselves, Abraham Gilbert , left alone, published the third and final issue of “Sadlatzar Leben”. This was the end of the first period of the Yiddish paper in Siedlce.

Hebrew version written by Itzhak Caspi: The beginning of the Yiddisher JournalismCaspi in “Ancesters Tell Siedlce”.