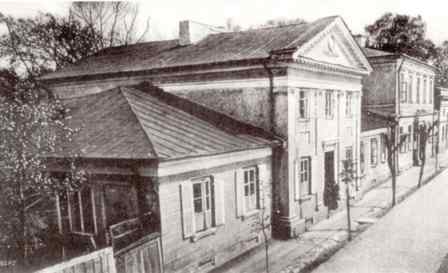 The story of the new Jewish Hospital began in 1869. According to a decree of the Russian government, titled “Regulation regarding special attire and behavior of Jews and their wives,” dated July 19th, 1851, but published on March 3rd, 1871, chief of police, Drach, sent a copy to the Dozor and demanded publishing it in the synagogue three times. At the request of the director of the Shire, the Dozor was asked to influence the Jews so they cut their sidelocks and hair similar to the Christian population. Jewish women had to remove their wigs and bonnets. By March 10th 1871 they had to purchase hats, and by March 15th, Jews had to replace the clothes as ordered by the regulation. Those who did not oblige will be liable to prosecution. The dress policy, however, did not apply to Rabbis.

Some of the city’s Jews absolutely refused to part with their traditional clothes and were fined by the authorities as a punishment. The fines were deposited by the official government representative at “Bank Polski” in Warsaw, and in 1869 the balanced was 11,551 Rubles. The Jewish community, headed by Dozor Israel Ber Livrant, has taken steps to refund the fines to the community, in order to establish a hospital. This lobbying lasted more than two decades until the request was approved, and the related correspondence reveals an interesting picture of the life of the Jewish community in the second half of the 19th century.

The community has presented building plans and proved that a suitable place for the building of the hospital has been set – a piece of land adjacent to the city market square, down Fiinknh Street. For now, the plans were for occupancy of 12 beds, expandable to 15 beds.

Four years have passed, and on August 23rd 1877 the Dozors H. Tzibolh and S. Greenberg asked the municipality for permission to renew efforts to obtain approval for the construction of a Jewish hospital. They suggested the previous conditions again, but received a negative answer from Petersburg.

In early 1880 the municipality intended to carry out a large plan, which will change goals and places in the city. This included a plan to evacuate the horse market and transfer it to Fiinknh Street. Confiscate the field that belonged to the community and merge it with the area to be transferred, and to designate the place for a hospital. This proposal aroused great resentment among the Jewish population, because at the time all commercial life and business were in the market place and its surrounding area. Many Jews had shops and residential houses there.

The project, signed by the governor, was delivered by the municipality to the Dozor on April 22nd, 1884. The municipality turned his attention to the fact that the location desired by community management is unsuitable, being in the city center near the planned market. The municipality offered a plot owned by Boialski (the military hospital was established on this lot later, and during Poland’s independence – the recruiting office was located there).

On January 31st 1885 the Dozors Israel Ber and Biniamin Livrant signed a commitment to set up the hospital at a cost of 125,104 Rubles, with a personal guarantee of their homes and all their possessions.

Due to technical errors and changes in the plan, as well as errors in the calculation of costs, the project had major modifications and the matter dragged on for another four years. Only in 1888 the necessary documents were prepared and presented, together with an application for final approval.

The Jewish community appealed to the governor, on December 18th, 1890 to appoint a doctor “of the Jewish faith, who could speak Yiddish with patients.” The community also suggested that Dr. Rosenthal, who was known in the city for his diligence, morality and willingness to care for the poor Jewish patients free of charge. The request was, indeed, confirmed.

The hospital building was completed in 1890. On September 5th, 1891, for the opening, the governor contacted the Dozor, through the municipality, asking him to offer homeowners, familiar with the affairs of the hospital, as candidates for the position of the “Kortor”- Administration Manager – of the institution. The municipality proposed five candidates, the community offered five others, and Alter Slosni was finally appointed by the municipality for a term of three years. The Jews were asked for their views, arguments were heard, but the authorities did as they pleased. The second director, however, Abraham Kaminski, has been appointed by the community itself, and I. Weintroib served from 1902 to 1926.

In 1892 an epidemic of cholera broke out in Siedlce, and the hospital became an epidemic healing institution. At the end of the year Dr. Rosenthal announced that effective January 1st, 1893 the hospital returns to normal operation.

Fifteen stores were built in the hospital’s premises in 1902 in order to ensure its income.

Written by Itzhak Caspi in the book: “Ancestors Tell Siedlce”.