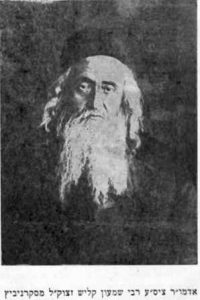 When I returned from Lida Yeshiva at 17 years of age, my late father and my grandparents – my mother’s father Rabbi Eliezer Ari ‘ Flotznik RIP, and my father’s father – Rabbi Ephraim Greshsnkorn RIP, both famous Hasidim – began to worry about getting me married. Among the most prominent who spoke of me, they seem to like a match from Shedlice the most.

I did not know my father in-law, the holy Rabbi Itzhak Weinberg RIP, who was killed by a Russian officer during disturbances conducted by the Russians in Shedlice in Trs”z (1907). My widowed mother in-law has inherited the estate of her husband – a home and fortune, and when they offered my parents to give me a handsome dowry and five years “foods” – the offer was accepted.

My grandfather, Rabbi Elazar Arieh RIP, used to say that a Yeshiva student eats “foods”, and if he seeks perfection – he better not have his father in-law stand on his back. After all, the nature of the father in-law when provisioning “food” is to try to serve as a guide to the young groom. As I’m known to be an intelligent person, such a father in-law could hamper my progress to perfection. A special point was the matter of a martyr’s death which had a tremendous impression on our family as a source of honor and compassion, and so these factors decided that I would marry get married in Shedlice. There I met our Hasidim, and joined the members of elderly people, Hasidim and people of action, exalted in the Torah and Hasidism enthusiastic. Entering their society wasn’t so easily. The Lida education I came with raised much suspicion. For a whole year I was examined and tested, tried in many trials, and after I went through them I was accepted as a friend and a brother.

In the circle of my friends the silent would be preferred over the talker and be respected and cherished. The Vorka Hasidim would preach the value of silence as follows: Until saying anything – you are in control over it, when you say something – it is in control of you. If a Yeshiva student would come to boast his erudition, he would be told: “You are a scholar – Begone way out now!”. And these words weren’t meant to dishonor Torah scholars, rather the contrary – those who have not had Torah spirit had no place at all in this company. The same rule is known “the ignorant can not be a Hasid” interpreted and fulfilled in the full sense of the word. But this statement intended for heaven’s sake; No person should pride himself using the honor of the Torah.

Many of them were so influential that one meeting would leave an impact on you for the rest of your life, and they deserve to be mentioned:

Rabbi Shalom Bialer RIP was a Jew knowledgeable in the Talmud and the four parts of the “Shulchan Aruch” by heart. His wife was the one engaging in trade and economy of the home and he didn’t even know the shape of a coin. He has always been busy in the Talmud and had nothing on his mind but the four cubits of Halacha.

See Reb Tovia Kramarz RIP, a great scholar who made bold innovations. His special field of study was Mishnayot with the commentary of the Mishnah by Maimonides (RAMBAM). You couldn’t find a clean edge on the pages of his books without some Torah Innovation scribbled on it. His pen was super fast. And even though he was never a merchant, he was a clever negotiator and knew the ways of the world. His way was very different then Sholom Bialer‘s, who was simplistic in his manners and even used to sit for prayer near the doorway. Rabbi Tuvia, on the other hand, would stand and pray in the eastern wall. He would prolong his prayer and make sure the cantor is waiting for him to finish his prayer. And when Rabbi Tuvia remembered Pesachim nights he did in Vraka, at the old holy rabbi’s, he would fall silent with admiration, his face would flare up, his lips paved, and no sound came out. But he always used to finish by saying: I am sure that, besides Admorim traveling to Varka – R. Brish from Bialah RIP, Rabbi Yehiel from Alecsander RIP and the rabbi from Nedrazin Rabbi Yaakov Yehuda RIP – very few Hasidim achieved the ways of his holiness, and here you come with spectacular courage to talk about the Holy man from Varka!

Rabbi Eliezer Lifshitz RIP, one of the greatest traders in Shedlice, a rich man with great abundance, Torah and importance in one place. He was an expert in the Talmud and in spite of all his business’ secrets he would allocate daily time to study Torah, both morning classes and evening classes. R’ Asher Moses Alkenboim RIP and Rabbi Avraham Yehudh Rozen, were brothers in law. They were business partners and owned a grain-mill in partnership. They were never rich, but well to do, and still they were giving charity and kindness at anytime. The degree of “Blessed are educated to low” should be learned from both “homeowner” Jews: their homes war absorbed with Torah and good deeds, where every man in trouble could ask and find aid, the wife of Rabbi Asher Moses was busy day and night preparing stews and dishes foe Israeli patients in the hospital, and even providing prisoners with lunches, all done secretly (Matan Ba’Seter). And everything is done carefully and quickly without expecting payment, gratitude, or honor.

Once I visited Rabbi Asher Moses at the mill. It was half an hour before closing the banks. I noticed his face and his movements were a little nervous. I asked him for the reason of this nervousness, and he answered, with a smile on his face, that he needed to repay the bank 1,500 Rubles, and was still missing 700 Rubles. As we were speaking, entered the Jewish Hasid and asked to borrow 300 Rubles. R. Asher Moses stood up immediately, opened the locked cashier and pulled out 300 Rubles and handed it graciously. As soon as the Hasid left, he asked me in these words: this must seem an odd thing to you, certainly, how can a person lend 300 Rubles while he sits and worries where to take another 700 Rubles from? I am can therefore explain the matter; a Jew is in need of salvation immediately and I sit and worry anyway, so why should we both worry? If Hashem would provide me with the missing 700 Rubles – it is not a big deal to provide an extra 300 Rubles, as long as the other Jew doesn’t have to worry. He died on Cheshvan Trtz”o.

These ways of charity and benefaction was also the way of his brother in law of Rabbi Avraham Yehuda Rosen, who’s sitting with us today in Israel.

Rabbi Shlomo Ha’Cohen Rosenblum RIP was still a yeshiva student at the table of his father in law when I came to Sieldce. Bar Orian and Bar Avtan. He was the son of a distinguished family in Israel, the mother was the sister of rabbinic Baskernibitz, and he had the virtues immeasurably. He did many good things, and one interesting fact, out of many, should be told:

Rabbi Solomon was careful about purity and has not had a day without immersion in the Mikve. Once his watch and gold chain (his engagement gift) were stolen as he went down to dip. This was a big loss, worth several hundred Rubles. Yet, when he returned from the Mikve to pray with the Hasidim, the loss was not evident on his face at all. He told me the details with complete indifference and a smile.

I asked him what he planned to do. He replied that he would invite the attendant to Din Torah. After all, there was nobody else at the place when he was immersed in water. After the trial I asked him about his claim under biblical law, and he said that he would have sued for the payment of full damages, but since he knew that the attendant was a poor and needy Jew he relented to sue only a part of the sum and as a fee for using the Mikve. I continued and asked him then: I am sure you will not deduct it, but keep paying service fees as before, so what was the whole thing good for? He replied to me that he had to sue the attendant Din Torah for the sake of his wife and father in-law,  ……..

I bless this innocent honest man who perished at the age of thirty-two, Yom Kippur Tra”a.

R’ Asher Gedaliahu Goldberg RIP, was a very close friend of mine. A spoiled Hasid, noble among knights, ahe artist of the feeling of grace, a man whose agony is treated without a groan, his face shines always, unknown forces in him during the period of old age for Torah and work, all meek and discreet, I was 17 years old and him in old age – 60 years old – we understood each other without many words. Estimating and forming opinions on various issues we would not need to talk, it was enough to look at each other and we knew each other’s heartfelt. Sometimes we would say to each other thoughts of the heart and get it exactly right.

My friend R’ Asher Gedaliahu, a lover of Eretz-Israel, barely made a living out of a small hostel, and yet always told me that he had no desire for richness, only enough for a chance to immigrate to Israel. When one of the late Rabbi Israel Yosef Hasidim has late left our town to Jerusalem – not a day went by without R’ Asher Gedaliahu, talking about R’ Israel Yosef RIP.

In my conversations with him he would say: I envy you for one thing: I’m sure you’l immigrate and go to Eretz-Israel. – you’re still young, your longings are great, your ambition strong, and in the future you will win it in due time. And I what? I am getting older, and if not now, when? Who knows? – Sitting in Warsaw years later R’ Asher Gedaliahu sent me a gift as a sign of friendship – his Talmud he was given as a gift when he got engaged, and he signed his name on the cover of each chapter as a souvenir, and when I was active on behalf of Bnei Brak he commented to me during a conversation, by the way: for now you take my Talmud to Eretz-Israel and I hope you remember to take me there as well at the first opportunity. Unfortunately, being overworked for the first few years after my arrival in Israel and busy with trips abroad, I didn’t manage to bring my old friend to Israel, and he died in the meantime in Shedlice. May his memory be blessed forever.

Hebrew text taken from the book: “My memories of Bnei Brak”, Itzhak Gerstenkorn , printed in Israel in 1942.