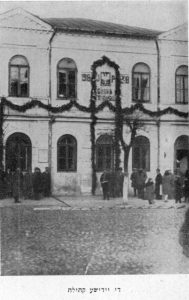 A few years before the outbreak of the First World War, a large influx of Jews to the city of Siedlce has occurred, and the city has developed and flourished, especially in the construction industry, due to the frequent fires and the need to rebuild houses. In 1902 the Jewish construction workers tried to organize themselves in their own trade union, but were met with the resistance of their Polish colleagues, who asked them to join the General Union of Building Workers.

A major industry for Siedlce’s Jews during this period was the shoemaking industry. Before the war Siedlce had 132 workshops engaged in shoemaking, and the produce was distributed throughout Russia except for local consumption. In addition, 190 e apprentices were employed in this industry. Another 38 craftsmen made boots and employed about 90 apprentices and hired workers. These were recorded as a separate group. Local Jewish merchants and two Jewish bankers provided credit for the purchase of raw materials and the marketing of produce.

The second most important industry among the Jews of Siedlce was the needle industry. Before the war it provided employment to 35 independent professionals and 65 employees. Hatemitism was also common among Jews, and on the eve of the war 17 independent professionals and 10 employees worked there. After the war, modern textile industry started developing in Siedlce, but few Jews made their livelihood of it.

In 1900 the Bund organization began operating in Siedlce. The movement operated illegally in an apartment in the city center. Before the revolution in 1905 its members distributed a few leaflets prepared by local Jewish printing workers, and leaflets that were sent from Warsaw. They also stood behind the first strike in Siedlce – the carpentry workers’ strike. In 1903 the Czarist police uncovered the center of the underground activity of the Bund, but the arrest of the activists and the confiscation of the publications did not stop the activity of the movement in the city. That same year, small groups of “Poaley Zion” and “Socialist Zionists” (ZS) began operating in Siedlce. The “Poaley Zion” group was established by emissaries from Bialystok, which was the source for party publications placed in the city. Many Jews joined the ranks of the Polish Socialist Party (PPS).

With the expansion of Zionist activity in Siedlce a Zionists college was founded in the city in 1900. The Conference of Russian Zionists, held in Minsk in 1902, was attended by two representatives from Siedlce, Moshe Goldberg and Yehoshua Goldfrb. In the same year a branch of the “Tehiyyah” was established in the city, and a group of “Bnei Zion” was also active there. In 1907, after a pogrom wave, a group of Siedlce youths immigrated to Eretz-Israel. In 1912, the Zionists of Siedlce has organized a conference marking the 30th anniversary of the renewal of Jewish settlement in Israel, which was attended by Itzhak Grinboim and Apolinary Hartglas, the leaders of the Zionist movement in Poland.