And when I come to describe what I saw and found in my city, Siedlce, to the best of my ability and in my state of mind and according to my views, I will tell of “Ha’Mizrahi”, which I was one of its founders. I will first describe to the reader the image of the city’s rabbis, its students, its merchants, merchants, and followers.

It is told that during the debate between Hasidim and Mitnagdim (opponents), one adversary asked if the of Israel, which we expect to arrive any day, will be from the followers – or the opponents. Ba’al Ha’Tania told them that the Messiah would be an opponent. Asked the opponent: “The Hasidim say that your path is the right path, while your honor tells me that the Messiah will be opposed”. The rabbi answered him: “Hassidim respect a true opponent, but the opponents do not want to respect a true Hasid. Therefore, for all to believe in Messiah – he will be an opponent, and the Hassidim will believe in him”.

Indeed, in Siedlce’s praise we would say that both Hasidim and prominent opponents served as rabbis, and almost all of them were fond of the entire city’s people. Not only that, but they have not been swept by the dispute between factions, as was the fate of other Polish cities.

The first rabbi of Siedlce was Rabbi Zusia Flotzker, a very keen student of Rabbi Bonim from Pashssiha, a friend of the Rabbi from Kotzek and the Rabbi from Warnaka. He was followed by the Hasid Rabbi Shmuel Shinowara, author of “Ramatayim Tzofim”, followed by the well-known opponent Rabbi Israel Meizlish, the son of Rabbi Dbabar Meizlish, the Rabbi of Warsaw. Next was Rabbi Mordecai Lifsitz, an outspoken opponent and author of “Brith Yaacov”, who at the new cemetery in Siedlce has a tent of Zion, built on his grave. Next was Rabbi Isascar Baris Girbrts, who was among the crowd of Hasidim. He was a great Torah scholar, knew many languages ​​and was knowledgeable about the world. When he finished serving his term in our city he was called to serve in the city of Bedzin, and authored the book of questions and answers “Issachar words”. Rabbi Shimon Dov Analik from Tiktin, called “Der Shvartzer Ilui”, was Siedlce’s next Rabbi. Although he was an outspoken opponent, as befits a Tikotin educated person (the city known as the bastion of opposition to Hasidim). I do not know if there ever was a more love rabbi among Hasidim as this opponent, not because he adjusted himself to the public and used to wear silk throughout the week and on Saturday – a streimel, according to local custom, but because of his good heart and dedication to public affairs and the Tora.

The figure of Rabbi Analik and his behavior during the pogrom in Siedlce in Trs”h – 1905, inspires admiration, writes Itzhak Caspi in the first part of this book. It should be noted that the Rabbi didn’t oppose the Hasidut only, but also any views of national policy, nevertheless he was liked and respected by  Zionists as well, because he was a truthful man and was ready to sacrifice his life on the commandments and the affairs of the community. I recall, during the beginning of political Zionism, a resident of Mezrich, rich, Bar Orian and ardent Zionist, came to speak at the college and received authority by one of the city’s leaders, Rabbi Yitzhak Nahum Weintraub, who was then head of the community, and the Rabbi wasn’t consulted. Posters were glued to the Schul’s walls – hat on a certain date and time “so and so will give an address”. At the given hour the Rabbi left home, went to the Schul and stated that he does not give permission to speak any political issues and the like. Rabbi Isaac-Nahom Weintrob said to him: Rabbi, he has been given permission and a large audience has gathered and human dignity requires that he be allowed to speak. Rabbi Shimon kicked his leg and said: “I was never defeated by any person; in Beit Midrash I’m the landlord. Tikatin still has no Rabbi and I can go back there”. He did not allow the speaker to speak, for the Beit Midrash was a place for prayer and for morality issues, but not for secular matters.

The Rabbi of Mogilancia, Rabbi Chaim Yeuda Ginsburg served in Siedlce after Rabbi Analik. The rabbi was a Hasid, a great Talmid Chacham in the Polish method of “Pilpul” and devoted to the affairs of the city. Even though he was far from the former rabbis – they were far ahead, and even better preachers – he was not disputed.

The last rabbi of the city, until the destruction, was Rabbi Shlomo Aichenstein, the Rabbi of Hodorob. When the Nazis came he fled to Russia and no one heard any more about him. 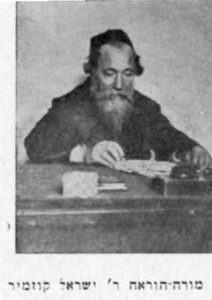 During Rabbi Ginsburg’s days of service several officials stood out in Siedlce. One of these is Rabbi Moshe Hirsh, who was added as a regular teacher – Dayan – to the local rabbinate. The justice court in the city also included Rabbi Israel Kozmir, and they were assisted by Rabbi Nachman Leib, who was acting rabbi at “SHAS” class and was great in Torah and honest. The latter was the son in law of Rabbi Avigdor Riddle, whose eldest son, the flour trader Rabbi Shimon was known as a public figure and as a Mohel, who would leave his business to perform a mitzvah without receiving any benefit from it.

One of the owners of the largest trading houses, whose teachings was their craft, was Rab Tovia Kramarz, a scholar who had been at home all his life to learn the Torah, and only on moments of rest would go into his haberdashery shop on a Warsaw street, to watch it a little. His sons were also Torah scholars, and as their father – did not do their Torah as an ax to dig with. The son, Mendel Kramarz, a cigarette factory owner has invented a sophisticated machine and was granted a patent by the Russian government.

Rabbi Tuvia’s brother in law is the ardent Hasid Rabbi Eliezer Lifshitz, a big and wealthy tobacco merchant. Although Rabbi Lifshitz was busy at his trade, he never came into his shop before the fifth hour, after prayer and the regular lesson, and even after lunch he would not be back in the shop but sat and learned.

Rabbi Shmuel David Ziidntziig, like Rabbi Eliezer Lifshitz, was a timber merchant who stayed in Warsaw most of the week on business. However, an hour before he left for Warsaw, he still sat in his home and thought of the Gemara and Torah, and when he returned home on Thursday afternoon he made do with a blessing of peace for his family – and hurried to his corner to study Torah. This way he walked in the ways of his father, my grandfather, Rabbi Israel Sinai Ziidntziig. Grandfather, a Kotsk Hasid, had business in many sectors, houses and forests, including the hotel “Anglski” on Fiinknh Street in Siedlce. For many weeks he stayed outside the city, and on Saturdays he stayed at the Hasidim house for hours after prayers, engaged in Torah study until late in the afternoon and only then returned home for the Sabbath meal. One of his fathers-in-law, was my father, one of the greatest Torah scholars and Hasidism, who devoted his days to Torah and worship.

Among  the generous and pious Jews of Siedlce were Rabbi Abraham Lifsitz, the father  of the city’s rabbi Eliezr Lifsitz, and the two grandsons of Rabbi Yosef Anzls –Asher Moshe Neleknboim And Abraham Jodl Rosen, whose wives were also well-known for their generous hearts. At the beginning of winter the two took care to prepare firewood, potatoes and warm clothing for the poor, and ditributed it generously among the needy. Similar generosity was shown by Rabbi Mordechai Heiinsdorf, who made his living as an owner of a tanner workshop and whose home was an assembly place for his Hasidim. During holidays, on Rosh Chodesh, and on holidays and festivals, Hasidim would eat and drink satiety on his table.

There was also Rabbi David Mintz, a merchant and a righteous person, called Rabbi David Laibels after his father in law – Rabbi Herschel Laibel. his livelihood was from the stationery trading house on Warsaw street, but even his business was for the purpose of serving God, so he’ll have a living and he would not need assistance from others, and as soon as he was back from work he would go back to his real work – the work of God.

A mixture of Torah and occupation is also found in Rabbi Hirsh Yosef Tzernobroda, an observant opponent who prayed upon waking up, studied the fixed lessons and then came to his business. His brother Berl was dressed in the way of Hasidim, but was educated and advanced. He was the librarian at the Siedlce Library and the founder of the “Nightingale” club.

Rabbi Gronem Friedman was very rich, trading mainly with the Goyim and lending them money to purchase houses and mansions. He used to pray in the large public Beit Midrash, but on Saturdays he wore silk clothes and his sons were instructed in the spirit of Torah and Hasidut.

And we will not forget another two Jews who built on their expense, for the good of the public, synagogues that were named after them. One is a rich landlord, Rabbi Fishel Frenkl, and the other – the doctor Sheflynn, who built a synagogue in his yard on Fiinknh Street called Bet Midrash Sheflynn. it was an exhilarating sight to see him attending patients with his observant beard. And although not officially certified, Sheflynn was considered a medical expert in all aspects.