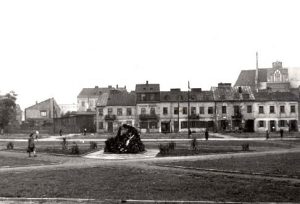 There are two versions describing the beginning of the settlement. According to one Siedlce was established in the late 13th century by settlers from Lita along together with Jews from Sokolov and Lukov. During this period, the area was subjected to repeated attacks by tribes Ydz’ooingim, who invaded from the steppes of eastern Poland, and the Lithuania King of Poland, “shy” Boleslaw, was forced to wage incessant wars with them. According to the second version Siedlce was established by Mzorim tribes, which came from the areas of Tz’ihnob, Makov and Ostrov, in the late 13th century, and settled on the banks of the River Bug.

Siedlce was mentioned for the first time only in 1448 in the writings of the Royal Archive Division of the “Polish-Katan” region. During this year ZbigniewAolsintzki, Cracow’s Cardinal, allowed Lukow city authorities to collect taxes from the village of Siedlce, which was not recognized as an independent settlement. At the beginning of the 16th century, a dispute broke out between the landlord of the village of Siedlce, Daniel Sdltzki, and Mikolaj Zalewski, Lukow’s mayor. Sdltzki requested independence for Siedlce. In 1532 the cardinal of Krakow, Piotr Tmitzki, ruled in this matter and recognized Siedlce as an independent Christian community. Siedlce was granted city status in 1577 by King Sigmund August. During this period the first church was also built. At the end of the 16th century the population of Siedlce included – 12 bakers, 7 butchers, several other artisans among others.

During the 17th century, several fires broke out in Siedlce, consuming its buildings. In 1653 King Vladislav the fourth reaffirmed the privilege granted by King Sigmund August for the rehabilitation of the settlement. With the third partition of Poland, in 1795, Siedlce was annexed by Austria. The Austrian authorities paved new trade routes, and Siedlce enjoyed a period of rapid economic development. In 1809 the town was occupied by Polish troops serving in Napoleon’s army, under the command of General Jozef Dombrobski. After the 1815 Congress of Vienna, Siedlce was annexed to Russia. During the Polish uprising of 1831 Siedlce served as a base for a battalion, commanded by General Dobits. Since 60s of the 19th century, after the Warsaw Uprising of 1863, the Jews of the city – then more than two-thirds of the local population – suffered accelerated Russification, together with growing anti-Semitism from Polish city residents.