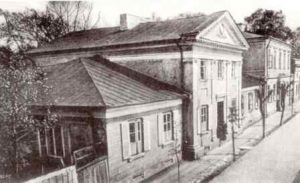 According to church sources Jews inhabited Siedlce as early as 1577. During the prohibitions of T’H T”T (1648-1649) the entire community died out by Chmielnicki’s gangs, although the chronicles of that time do not mention the Jews of Siedlce among the victims. It is said that several communities in the area were destroyed, but their names are not mentioned. It is assumed that the Siedlce community was one of them. In 1798 Duchess Alexandra Aoginskh of Lithuanian, who owned the city, has allowed the Jews of Siedlce to expand the Jewish cemetery. In the old part of the cemetery there were tombstones from the beginning of the 17th century, further evidence of Jewish settlement at this period. The new plot was used by the community until the 1820s.

Jewish Siedlce actively participated in the Polish uprising of 1830. In November of that year Joseph Berkovitz, who was the son of the commander of the battalion, Barack Joselewicz, paid a visit and encouraged the Jews to take part in the revolt.

The accelerated economic development of Siedlce in the second half of the 19th century did not cause far-reaching changes in the sources of income of the Jews, and they continued to deal mainly in trade and crafts. Toward the end of the century, there was a decline in their standard of living, as they were unable to adopt modern occupations in manufacturing or trade. In the 1890s, more than half of the alcoholic beverages factories, which were a traditional source of income for the Jews, were shut down. At the beginning of the 20th century, the impoverishment among the Jews led to the rise of the Jewish revolutionary movements, especially the Bund. 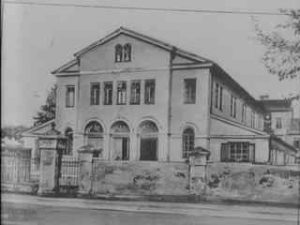 During 1794 the community purchased, based on a permit from the Duchess Alexandra Aoginskh, a prayer house which also served as a Yeshiva and residency of the Rabbi. In 1851 the synagogue burned down and was replaced in 1856 by a large, impressive building, which stood out in the neighborhood. This synagogue was also badly damaged by fire (in 1870), and was restored and refurbished in 1876. In 1878 a new Beit-Midrash was established in Siedlce sponsored by the philanthropist Israel Yechiel Greenberg. The Beit Midrash bore the name of the donor.

In the second half of the 18th century and early 19th century there was a conflict between the Hasidim and Opponents of Siedlce. With the weakening influence of the Hasidism, the opponents, led by the community’s rabbi, Rabbi Meir Nissan Nussbaum, who was well educated and translated a Hebrew book to Polish, brought non-Hasidic rabbis to Siedlce  – Rabbi Moshe Tzvi Weingaretn, author of “innovations of Maharam Tzvi”, followed by Rabbi Israel Meizlish, the son of a the Rabbi of Warsaw, Rabbi Dov Ber Meizlish. The next Rabbi, Rabbi Baruch Meir Lifshitz, author of “Brith Yaacov” was known as an opponent rabbi (“Lithuanian”). His name was famous outside of Siedlce as well.

In the second half of the 19th century Rabbi Isaschar Baris Groibert served as the rabbi of the city. He authored the book of Questions and Answers – “The words of Issachar.” He was followed by Rabbi Shimon Dov Analik, author of “Guest for Law” and “Imrei Rashad”. Rabbi Analik was actively involved in community affairs, particularly during the pogrom of 1906, and was vehemently opposed to the Zionist movement.

Admors arrived in Siedlce only in the 20th century, and during 1905 Rabbi Yerachmiel Tzvi Rabinowitz from Biala-Fodlaskh, of the dynasty “The Holy Jew” settled there. He died a short time after and his son, Rabbi Yechiel Yhosha, took his place. During the First World War Rabbi Yechiel fled to Russia with his family, and all of them emigrated to Eretz-Israel. After his death his sons were all named after the Admor of Biala. In 1926, Rabbi Avraham Pinchas Morgenstern, a local resident, began leading a Hasidic sect in Siedlce, and attracted many adherents from Lomza and Radzymin. Later he moved to Warsaw. He perished in the Holocaust with all his family members.

The city had its share of artisans of different professions, Gur, Skrniikitz, Alexander, Amnisob, Forisob and others’ Stiblacs. In the early 40s of the 19th century, “New Bikur Holim” society was established in Siedlce. Budgeted by members’ taxes, it also helped to finance medical care and other assistance to patients.

It seems that education has been introduced to Siedlce on the 20s of the 19th century. The city had a small group of Maskilim and 26 Jewish children attended the Polish elementary school. In 1849, a group of Jewish intellectuals got organized aiming to combat religious extremism and spread the ideas of the Enlightenment. The group published several sheets of handwritten newspaper named “anti-extremism”. One member of the group, Abraham Nosboim, used to publish articles in “Hamelitz” newspaper, and translated letters of Yehuda Halevi and Maimonides into Polish.

The Jews of Siedlce had always had an affinity to Eretz-Israel. After the Katowice convention, in 1884, “Hovevei Zion” has begun operating in the city. A branch of the “Committee for Support of Soil Workers in Syria and Eretz-Israel” was opened, and a group of “Hibbat Zion” activists even joined Ahad Ha’am’s secret society, “Bnei Moshe”. Zionist activity intensified in the early 20th century, when Yitzhak Nahum Weintroib, a merchant and community leader joined the movement.