These words, describing a visit to Siedlce after the war, are excerpts from M. Tzanin’s book, “Tel Olam: a journey through 100 destroyed communities.”

Only a few of Siedlce’s Jews have survived. Very few survived from Treblinka. Were it not for some Jews leaving with the Red Army – who knows if one hundred Jews of the 18,000 community members would have remained after its destruction.

As with all Polish cities, Siedlce’s Jews have not received any help from their Polish neighbors, with whom they’ve lived for many generations.

Some individual Poles did hide Jews. Only one Polish woman gave Jews shelter with no intention to receive awards or payment, and is harassed till now by Polish bums for this “crime”. The Poles mostly watched calmly as the Germans and Lithuanians raided Jewish houses, robbed and murdered Jews as poultry. Not only did the Poles look with indifference, but they also helped rob and identify Jews. When the panicking Jews asked for shelter at Christian friends – they were robbed and murdered by these friends.

The murder instinct and blood lust, fermenting for decades and not finding vent in all pogroms, were now satisfied.

Today Siedlce is a dead city. In other cities, where Jewish houses remained intact, local farmers came and settled in these homes. But barely any homes remained in Siedlce, so – where could the peasants settle? I went through many streets and barely counted ten people. Everywhere you glance you see the ruins and desolation, Siedlce has no markets and fairs now.

But it seems that even ruins require streets and streets require paving. And paving them are Jewish tombstones. Why should Siedlce be different than other Polish cities, such as Pinchev, Przemysl, Zamosc and Chelm?

After Siedlce’s liberation Jews began to return here. Maybe someone was saved? There might be a relative or a Savior? With so many orphaned – orphans do come to the cemetery to warm up a bit. But Siedlce’s orphans didn’t even find graves. All was lost, cemeteries were destroyed. Tombs were robbed. All around unbridled hostility raged. As if there were still unsatisfied murder instincts. Not enough Jewish blood has been shed. And with the slaughter of the first Jews who returned to Siedlce – the others have escaped, crossed the border and fled to larger and safer towns.

It had been a while after the war, when the new Jewish community consisted of more than five hundred Jewish souls from Siedlce and the surrounding area. Jews have already made plans to create a large community here and lay the foundation for a new Jewish Siedlce, and already established Party organizations and cultural cells, but savage hostility turned their plans upside down. Currently, about two dozen Jews roam the alleys of Siedlce not knowing what to do.

The deep longing of individual Jews for full Jewish life is expressed in heart-touching concern for everything with relevance to Jewish religion. 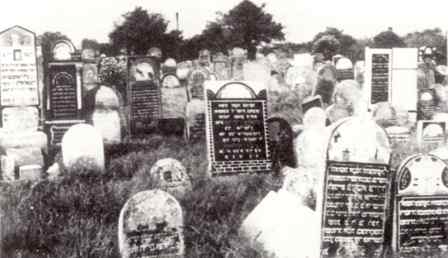 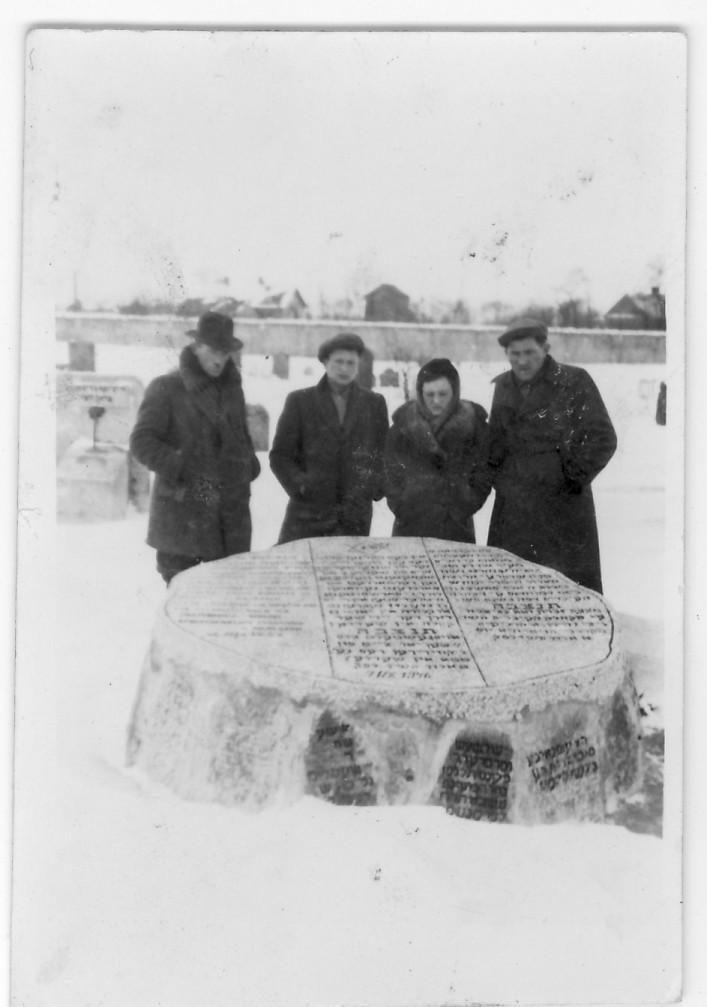 The new cemetery houses mass graves of thousands of Jews slaughtered by the Germans and Lithuanians during the first deportation which began on August 27th 1942 and lasted for several days. During these days twelve thousand Jews perished.

Hundreds of Jews were murdered in those days in the fields and in the surrounding villages during their flight or while trying to hide. Jewish Yontl Goldman dug three hundred and sixty of these saints and transferred them to the Jewish cemetery. They are buried in four mass graves over which a monument was erected in memory of Siedlce Jewish community.

The courtyard of the Municipal Gymnasium in Siedlce was paved with Jewish tombstones. Goldman showed me a letter from a Polish writer and teacher, Anna Staniibskh, where she asks the Jews to take out the Jewish gravestones paving courtyard as it has an anti-moral effect on Christian youth studying in the gymnasium….

And let it be listed here for Jewish history:

On Christmas Eve 1939 the German murderers set out into the street with flaming torches to sanctify the name of Jesus and they walked toward the old synagogue, the Great School and the old cemetery, the murderers poured kerosene on the buildings and set fire to them. The entire Courtyard Community Building went up in flames.

Under the floor of the Beit Midrash Jews hid the silverware and valuables of the community. There were buried iconostasis, Torah crowns, two of them were especially valuable museum pieces, forty silver candlesticks, lamps, Torah scrolls. All this was on fire. 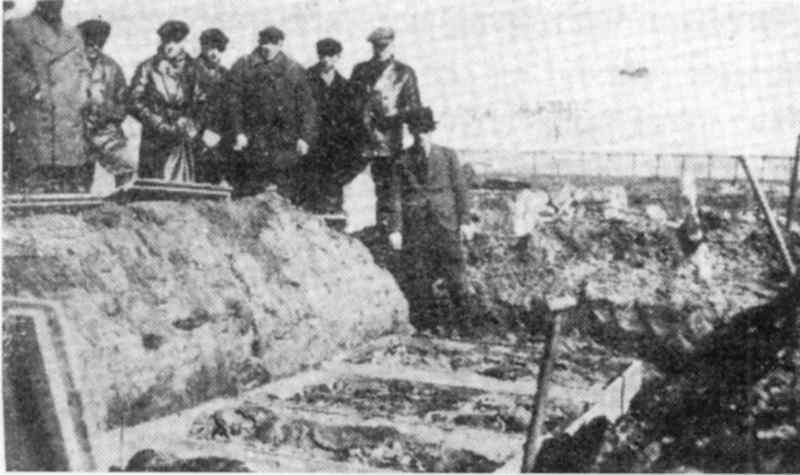 When Poland was freed from German occupation and among the city leaders were socialists Polish Party PPS, they offered the Jews, since the vacant lot of the ruined synagogue and Beit Midrash and the old cemetery occupied the heart of the city, the Jews and erect a monument, to tell future generations about the brutality of the German people, the murders and acts of violence. But among all institutions of Polish Jews – no one took care of erecting this monument. Not one public figure in Poland (although all Polish Jews institutions had financial means available), agreed to take action.

The municipality has established another monument instead.

As in all the cities of Poland – Siedlce municipality has also established a monument to the Red Army. The monument was built some distance away from the location of the synagogue. But some Polish communists believed that the synagogue plot is more prominent, more central. The municipality waited a whole year for any Jewish institution to assume the construction of a Jewish monument.

Remains of Jews in Siedlce traveled many times to Warsaw regarding this matter.

The municipality recently relocated the Soviet monument to the synagogue plot and set it there. Now they want the Jews to enclose the area of the old cemetery but too late. The Jewish cemetery will remain in the future a passage for the city’s residents, for erecting a fence might impair the looks of the Russian monument and will harm its perspective, was the municipality’s ruling.

Here Siedlce I encountered, for the first time in my journey across Poland, in the wholesale trade of Jewish gravestones. I’ve heard of retail trade before, but here, in Sieldce, a complete shipment has arrived.

How poor is our generation and with such poor conscience, it has lost all sense of shame, here in Siedlce I saw the abyss of degeneration.

A stonemason and trader from Siedlce have bought, in the city of Olsztyn, a wagon full of Jewish tombstones.

The strange merchandise was purchased as raw materials. The tombstones arrived to Siedlce by train, along with official documents. Yontel Goldman has noticed, by coincidence, when monuments were transported in the streets of Siedlce. It was a painful spectacle, when passers-by saw a Jew clinging to the cart and not letting it drive away. Even if he was trampled in the street – he would not allow the cart to go forward. The tombstones belong to him, the nation’s successor. He didn’t stay alive to allow desecration of the graves, turning them to whetstones, making them the crosses on Christian cemeteries.

The merchant struggled with the Jew. It was his merchandise. He paid for the shipment, for the carriage, for the wagons and does not want to know about the feelings of a Jew.

Yontel Goldman called the militia, he demanded justice, holding on to a cart and explained that it will move only over his dead body. He will not let Jewish tombstones go through Maidanik. The merchant arguments were to no avail; he does not want and does not need to know the value of these stones in the eyes of some impudent Jew. He has an official bill of ten thousand tons, has had an official document of the train – it’s okay. The tombstones were unloaded in Siedlce, the railway administration has declared that it did its job. It delivered the shipment to its destination. Thus the tombstones are lying in Siedlce, with prohibition from being used as raw material…

But here begins the horrible orphanhood of the remnants of Polish Jewry.

Jews from Siedlce wrote to Warsaw Jewish institutions. These institutions argued that the scandal should be minimized. Therefore, they only turned to Holstein, asking the local government to order sending the shipment back. The local Government said that if the Jews return transport costs they will be willing to demand the return of the “goods”…