Siedlce was occupied by German troops on October 11th 1939.

Prior to World War II about half of the 30,000 residents of the city were Jewish. A few days after the Nazi occupation, on November 15th 1939, they began rounding up Jews. After being convened in prison, they were marched to Wegrow the next day. There – about 50 of them managed to escape from the marketplace during the night, including Herschel Kiev and his father. The others were taken to Ostroleka.

In the Polish Jewish Historical Institute quarterly, “Bletter par geshikhte” (Pages of History, Volume 4, Issue 2), appears in a table with the number of Jews in Siedlce since the beginning of the war until the extermination:

In two and a half years the number of Jews in Siedlce has dwindled. Nazi henchmen murdered them at every turn, diseases and epidemics that spread easily due to unsanitary conditions beat them mercilessly. Many were victims of economic distress and severe hunger which steadily worsened.

From the beginning of the occupation the Germans aimed their propaganda press at the Polish people in order to justify the murder of the Jews. For this purpose they used posters and texts such as:

“Typhus is one of the most dangerous diseases, sometimes fatal. Typhoid fever is highly contagious, spreads quickly and easily penetrates the bloodstream. In our region it’s very prevalent among Jews in particular.”

During Jewish holidays Germans entered the synagogue, beat the captured Jews praying there, tore off his Tefillin and Kippot, and shot those who tried to escape through the windows. Yosef Rubin was murdered tin this manner, on the seventh day of Sukkot. From the beginning of the occupation, the Germans looted Jewish homes and shops.

At the end of November 1939, the Germans ordered the establishment of a Judenrat – Jewish council in the city. The Judenrat included: Yitzhak Nahum Weintraub (Chairman), Hirsh Aizenberg (Vice Chairman), Hertzel Tenenbaom (Secretary, responsible for contacts with the Gestapo), Dr. Henrik Loabel (Department of Sanitation), M. Tzernobroda (Finance) M. Rotbain (employment), I. Landau (lawyer, social worker), A. Altenberg (supply department), L. Greenberg (legal aid), R. Leiter (General affairs). Overall there were 25 members in the Judenrat. All in all, the members of the Jewish were known Jewish leaders granted enormous power by the Nazis, until the moment when they too were deported. The Council directed the affairs of the Jews, their property, personnel, and their mission was to prepare the “transport lists” (containing the names of the men who were sent to extermination camps). A Jewish police force, numbering about 50 people imposed order, armed with police hats, bats and identification tags.

In addition, a sanitation authority took care of sanitation and order in and houses, alleys and courtyards of the Jewish neighborhoods. After the establishment of the closed ghetto, this group functioned under the Public Health Department of the Judenrat. 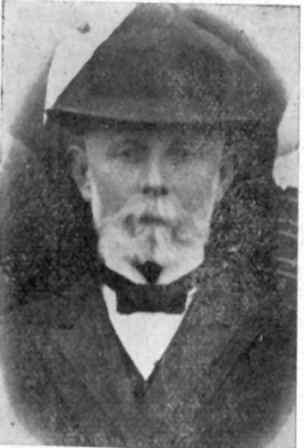 The Judenrat’s Chairman – Weintraub – was an older man, a well-known political and social activist. For many years he was one of the leaders of the religious community and the Zionist movement. He kept a diary which indicated the most important events in the life of the city as well as the stories he had heard from elders of the city. Unfortunately, most of the material is lost, except things published in local newspapers in the period between the World Wars. In actuality, the Judenrat was run by Dr. Henrik Loabel. Emil Krfinski remembers that “people really fought each other, bribed and resorted to every means for gaining a foothold in the Judenrat, or the Jewish police”.

At the end of November 1939, soldiers entered the synagogue and Beit Midrash and threw out the Tora scrolls, tearing and trampling them.

During the night of December 24th – 25th 1939 the Nazis burned the synagogue. Jewish refugees trapped inside were burnt alive. 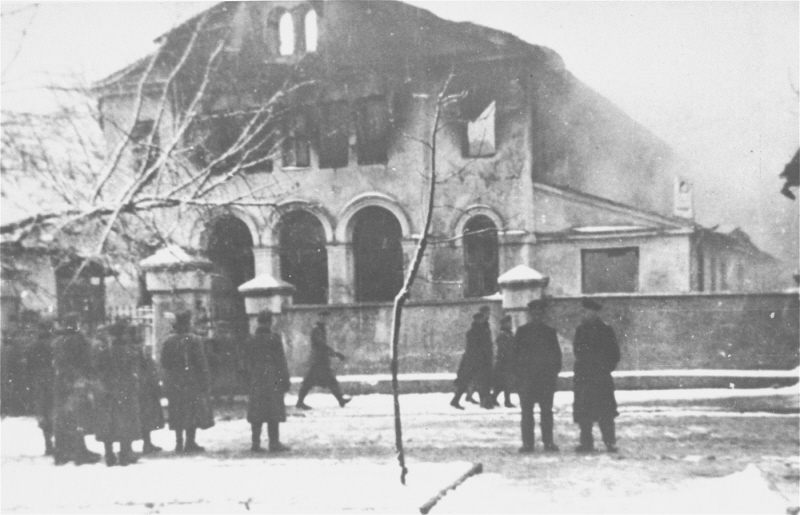 The testimony of Itzhk Caspi from “Jewish history of Shedlice “, Buenos Aires, page 29:

“The municipal synagogue was destroyed by the murderous Germans. The Germans set fire to the synagogue, while refugees from other cities who could not find places to live in the city  were inside. The next day, that the German authorities demanded that the Jews will confirm, in writing, that they themselves set fire to the synagogue. Along with the municipal synagogue also burned the municipal Beit Midrash (dated in the early nineteenth century), located near the synagogue and the private Beit Midrash which was established in 1878-1879 by the rich opponent Rabbi Israel Yechiel Greenberg, and named after him. “

Until December 1939 the Judenrat was ordered to raise “contributions” of 20,000 Zlotys. During 1940, from spring to autumn Jews from Siedlce were transported for land improvement works in the area of the river Liwiec. The workers, divided into groups of 15, worked under the supervision of a Pole, himself supervised by SS Germans who ran the progress of the work. About 1,500 people left the ghetto every day and were assigned to forced labor.