Written in Yiddish by Yosef Finkelman.

Translated by his Son Yechezkel Philon to Hebrew and published in the book “Be’darcheu Hachaim” (the roots of life). 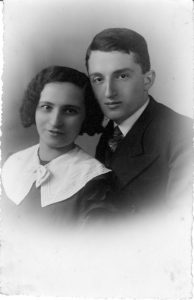 Goat Lane was one of the little alleys in Siedlce. All of which had a Jewish character, but nevertheless was alive and active twenty-four hours a day as if it were a main street in the confines of a city.

The noise and the commotion did not stop for a moment. Either by Jewish porters with ropes around the waistline, or Jewish and Christian loggers with axes and saws, or villagers who were filling the alley with wagons. A Jew could get a bundle of wood, a kilo of potatoes, or sometimes a chicken for the Sabbath. The noise and commotion came from Tuvia Schiffer’s iron warehouse. Where the peasants would try their scythe on stones to see if they were made of steel. Others would cut iron to measure. Not missing were the local stench coming courtyards and debris flowing directly into the sewers of the alley. There were a number of Jewish bakeries there, sometimes, quarrels broke out between the Jewish and Christian woodcutters for parcels of firewood.

Christians did not live in the alley, so when it was Saturday or a holiday, real relief was felt here. Jews would go toor from  prayer with their prayer shawls. The smell of cholent and chopped onions was everywhere. Women left their homes to chat with their neighbors or just gossip. No one was wealthy in this street, with the exception Tuvia Schiffer whose iron warehouse was in the alley as well. After so many years that have passed since, I still feel nostalgic for that place and my childhood days. When at the age of about two years old, I knew the corner house, red bricked, where we lived, and the neighbor Shalom Kaifirmacher with red cheeks and a small black goatee. He was a cheerful Jew, dressed in white, boots always shined. He made a living from the production of Kafir, made from skim milk, which had a slightly sour taste. It was his own patent. His wife Miriam, a tall Jewess with a coif on her head and a ponytail full of hairpins. They did not have children, so they would have fun with me. “Yosele” They would call me, “Let’s drink Kafir”. The woman took me into her lap. I often stayed at their place. I was attracted to the toys that were set on the dresser and I loved playing with them.

But mostly I liked playing with the downstairs neighbor’s son, Avramale Zetzer. His father, a thin Jew with a goatee and pointy tiny hat, typical dress of the Jews, always with bleary eyes from the dust of metal parts.

They lived in two tiny cubicles, facing the small yard. Metal parts and rags were piled up everywhere, even in the rooms themselves. It was astonishing how they managed to sleep in a place like this. The man was a widower with three small children. He needed work, so what could he do? My father, Netanel, still a young man with a red goatee, held a small shop not far from our house, in Thylene Alley. He had varied merchandise, all in small quantities. Sugar and salt, brushes and paints, kerosene lamps, glasses and cutlery. But the main thing was the candy for children. It was hard to make a living. My father often was talking with my mother; they should get rid of the store.

I had another friend in the alley, named Yankale. His father was Alter Isaac Siias. He was a baker. That Yankale had a sister as old as my sister, Hana Rahcel, that is – two years older than me. Sometimes we would all play together in the bakery. Their father would sometimes give us fresh rolls. During the game we would get dirty with flour and get beaten up by the mother.

My brother Shlomo, already studied at Asher’s Cheider, a Melamed in the same alley where we lived. My mother was very worried for her “Cheider Boy”, and whenever she managed to get a good thing, she hid it for Shlomol’e.

One day, when I entered home, I saw my Father and Mother very worried, my mother even cried. She called me and said Dad had been summoned to reserve duty in the Czar’s army. (Poland was at the time was under Russian occupation, during the pre-revolution days. Y.P.). We were all very worried about our parents’ condition, and that night we didn’t sleep.

My mother got up early in the morning, and began to prepare a package for my father that included clothes and underwear, tallit, tefillin, and provisions. My father was very worried about the children; he kept urging my mother to look after us. We were four children at the time. My older sister Haya Devora was ten years old and helped mom at home. She never went to school, except for a few times, that our neighbor Miriam, taught her to write Yiddish on a black board with chalk. She taught her to read as well. Our neighbor did not stop marveling at my sister’s good head. She quickly learned to read and write in Yiddish.

It was time to say good-bye to Dad. He called the four of us and kissed us on the cheeks. Tears welled in the corners of his eyes. He and Mother went and our neighbor Miriam called us immediately to her home. She gave us Kafir to drink. She encouraged us and said that Father would soon return, God willing. My mother returned later, crying, and called us home. Soon she began to prepare us something to eat. But at the sight of mother, none of us wanted to eat. The neighbor and his wife came to comfort my mother. The same neighbors helped us in those difficult days of war. (World War I. Y.P.)

One day, Ulpana of Varazdin’s Hasidim came to us, where my father used to pray. They gave Mom a certain amount of money and told her that when father returns home safely, he would make sure to return the debt.

Due to circumstances, my mother ran the store alone. And all the concern for the house fell on the soft shoulders of my elder sister Haya Devora. A few months went by. We did not hear anything from our father. At home there was a gloomy atmosphere. On Friday night, there was no more Kiddush and Shabbat songs, which Dad used to sing at the table. My mother sometimes cried at night. It was difficult for her to take care of us. We children, continued to play among the peasants’ wagons, as if nothing had happened.

She also said that Father was already in the barracks not far from the city and that we would soon visit him. A great joy broke out among the children. Many fantasies began to run through my brain about meeting Father. My mother immediately began to dress up. She smeared the coif with special oil, dressed herself in Sabbath clothes, and the children dressed in Sabbath clothes. She prepared special festive food for Father. And we went to see Father.

For the first time I went so far with my mother. We passed by the fire clock tower warning of a fire. We went onto Kalia Street; we went around the Russian church with the metal fence made of sharpened profiles. Everything seemed so new and unfamiliar, and made me feel naive childlike awe for a long time. We reached the high metal bridge above the railroad tracks. My brothers and sisters immediately began to run up the iron stairs. I was always on my mother’s hands but also wanted to get off to the ground and run after them. My mother began to chase us, and all the time she was afraid we would bend over the railing of the bridge. We really wanted to stand and watch the trains that pass under the bridge, sending black smoke from the chimney with the ear-splitting whistles that really scared us. When we moved to the other side of the bridge, we started walking toward the army barracks. Through the fence we saw many soldiers running with their long coats, carrying heavy equipment on their backs. We were terrified of the rifles with the long bayonets they carried on the shoulder, and the knapsacks with blankets folded and wrapped around them like a pretzel. As we approached the gate, there were two soldiers who would not let us in. My mother started talking to them in their own language and asked them to let us in until they agreed. Now we started looking for Father. But go look for a needle in a haystack. We spent a lot of time searching, until my mother met a familiar Jewish soldier. He helped us find Father.

At first we were very frightened of the large number of soldiers who were sitting along the walls on the ground. On every side we heard derogatory remarks and joking on us, until Dad saw us, called us to him, kissed everyone. He told my mother that he was being released the next day. My mother took some sort of map out of her suitcase, spread it on the floor and put the dishes she had prepared on it.

We children stood a little farther. And the truth is we didn’t recognize him in uniform, shirt buttoned up to the neck. A small round hat with a red-rimmed visor. On his feet he wore large military boots with leggings. Not really the same father we knew. He finished eating, gave a soft greeting, got up and escorted us to the gate. They did not let him exit.

By now my mother recovered. She let us play as much as we wanted. On the way back home she bought peanuts for us. That day was a big holiday for us.

When we came home, my mother told neighbors the next day my father will be released, God-willing. And we were all very happy and satisfied with the good news. That night we hardly slept. My mother and sister, Haya Devora, began immediately to clean the house and prepare it as preparation for a holiday. The next morning my father returned home in civilian clothes. The house was filled with guests. Everyone wanted to know something. Again joy was in our home. I ran to the neighbors, the Kafirmacherim, and told them about my father. On Friday evening my father took me for the first time to Ulpana Varazdin for prayer. Life returned to normal. Again I heard my father’s Zmirot Shabat, at the dining table, and at that time my parents began to talk seriously about the liquidation of the shop and moving to a more spacious house. Where we lived was too small. It was not long and my parents found a suitable apartment in Tzementranah Street in Abraham Siskind’ courtyard. That was almost outside the city, inhabited mostly by Christians. The only consolation was that Susskind’s yard was populated by Jews only. My friends envied me that we move to a more enhanced place. Even the neighbors were very sorry we’re leaving.

And so, as the day of departure approached, a horse-drawn cart entered our yard. My parents loaded it with all of their belongings me and my sister Hana Racel were  put on the wagon, and we left Goat Alley.