During the First World War, and especially after, “Ha’Halutz” movement started training the pioneers of our city for immigrating to Eretz-Israel. In the first pioneer Kibbutz in Kfar Peterkaz and at a farm of the Weiman brothers in Broshkashe, Jewish youths were employed in productive physical work. One of the main tasks of the movement was to get Jewish youth out of “the Air Business” and into healthy physical labor. 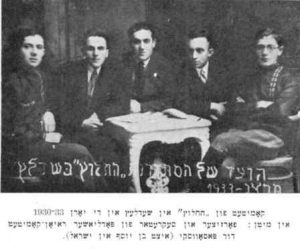 “Ha’Halutz” in Siedlce, like the entire Polish Jewry,has ingrained  the Zionist idea and fulfilled it in practice. Indeed, even during the war early pioneers emigrated to Eretz-Israel’s. They paved the way for dozens of young Jewish boys and girls and turned the vision of “Ha’Halutz” into reality.

“Ha’Halutz” youth activities are still alive in our memory and is varied and vigorous: the impressive “Tel Hai” events, with the participation of the choir and drama group of the movement, images of life in Eretz-Israel (Siedlce housed all the  regional committees, of all the Zionist movements in the region of Fodlash), Zionist conferences in Krinitzy village at the court of the Jewish squire, Tzinman. Those feelings of elation will not be forgotten, “Hora” dances around the bonfire until late at night, the loud Hebrew singing, carried out to the surrounding villages.

The important activity of mutual support should also be mentioned, allowing members to travel to Eretz-Israel, a journey which entailed significant expenses. “Ha’Halutz” foundation raised money for needy immigrants. For them, in the pre-Jewish Agency or JDC this was truly a rescue fund.

We will not forget the activists of “Ha’Halutz” in Siedlce, who haven’t fulfilled their yearnings to come to Israel and were brutally murdered by the Nazis. Including my friend Moshe Yom-Tov, a multi-faceted activist with many rights, one of the founders of the movement in Poland, my friend Benjamin Tz’arni, one of the last leaders of “Ha’Halutz” before the outbreak of the war who died from hunger in Russia and  David Foriitr, one of the most active members of the socialist-pioneering youth movement “Friihit” ( Dror ).

“Ha’Halutz” has organized all the Zionist youth movements of Working Israel. The Executive Committee included representatives of the “Ha’Shomer Ha’Tzariir”, “Freiheit – Dror” and “Ha’Halutz Ha’Tzaiir”. Every movement had a “nest” its own, and ran an independent educational activity.

Among those “Ha’Shomer Ha’Tzariir” took first place. It was purely a Scout movement, but due to the image, special uniforms, symbols and signals, headed by the slogan “Be strong and courageous” had a strong attraction force, which led the best of Jewish youth to join its ranks.

The movement focused its activities on youth studying in high schools and some elementary schools. Beautifully decorated halls, called “nests”, became warm homes for the “brothers and sisters” who were willing to help each other live, work and create together. I remember fundraising events and collections to secretly help the poor members, and allow them to pay the school fees or buy books, as well as enterprises of mutual aid, one of the foundations of the movement.

Lag B’Omer celebrations were especially impressive. I remember the proud march of the ”Ha’Shomer” youths in orderly ranks through the city, a march that evoked deep respect towards them and the movement, not only by Jews but from all city residents.

Thousands of cheerful young Jews gathered in the alley next to Yehoshua Lewin’s mill and went to Roskashe grove. There they set up tents and a field kitchen and spent the day singing and dancing. The woods were alive like a beehive, parents stood by, watching, and were delighted with their children. Toward evening everyone marched back to the city, with pioneer and Eretz-Israel songs on their lips.

Every summer “Ha’Shomer Ha’Tzariir” has organized scouts-like summer camps in Polish villages near Siedlce. The camps excelled in aesthetic appearance, strict discipline, rigorous order and unique education aimed at fostering longings to Eretz-Israel. One of the last summer camps I’ve visited as a guest was in a Polish village between Siedlce and Z’licob. The camp’s commander was Yosef Kabtzan, who later immigrated to Israel.

“Ha’Shomer Ha’Tzariir” was led by “Ha’Halutz” and came to prepare the young people for membership in the mother movement. No special attention was paid to inspecting the members, and it did not matter which school the student went to and what his “ancestry” was. Here you could find Talmud Torah and elementary schools students alongside craftsmen apprentices and children from respectable homes. 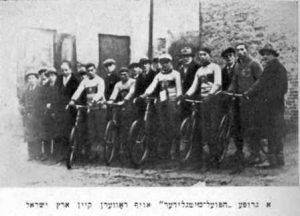 The Zionist-Socialist pioneering youth movement “Dror-Freiheit” was like its sisters, but was notable for its excellent sports club – “Ha’Poel“. The club was famous all over Poland. A bicycle trip to Eretz-Israel, organized by “Ha’Poel” in Poland in 1932, included participants from  “Ha’Poel” Siedlce and members of the ” Dror-Freiheit “.

All the Zionist youth movements Siedlce, during the blooming period and their glory years from 1930 to 1932, included about 2,500 members. The Department of Working-Eretz-Israel was about 75% – an important and crucial factor in the life of Jewish youth in our city.

The movements excelled in activities to collect money for the Jewish National Fund, Keren Hayesod, KPA”I – Eretz-Israel Workers Fund – and so forth. The conducted a covert competition between them: who will collect more? But beyond matters of material, the power of the Zionist pioneering youth could be seen in impressive parades through the city, especially the demonstrations held on the occasion of special events.

I remember, for example, the mass demonstration and march held in the city in 1929 to protest against the bloody events in Eretz-Israel. Young people, members of Zionist youth movements, marched for kilometers, over several blocks, and demonstrated to the public that Zionism in Siedlce is stable and powerful, strong and solid. Prior to Aliya to Eretzl-Israel members of all movements in Siedlce, stayed in training kibbutzim throughout Poland, and such a kibutz was established even in Siedlce. Unfortunately, sometimes it took measures to influence the parents to allow their children to leave for kibbutz training and overcome their objections to immigration to Eretz-Israel. The families have experienced heartbreaking tragedies, and some of those who immigrated to Israel had no correspondence with their families for years. The parents were angry at the boys defying them; they left the house, not deterred by any obstacle, and came to realize their dreams and here laid the groundwork for an independent Jewish state.